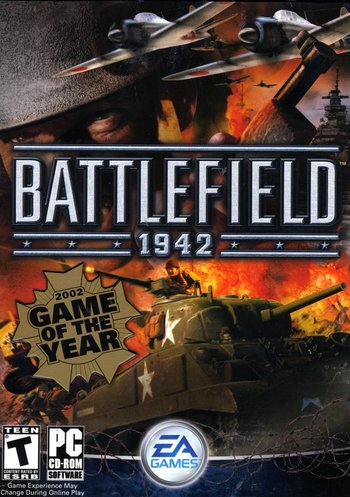 Where it all began.
Advertisement:

Battlefield 1942 is a multiplayer First-Person Shooter by DICE and the first game in the Battlefield series. note Battlefield 1 is a much more recent game down the line, "1" referring to "World War 1" It used the Refractor Engine and was released in 2002.

The game is set during World War II, and its maps recreate several famous battles between the Axis and the Allies in Western Europe, USSR, North Africa and the Pacific. Players have to choose one of five classes of infantry: Scout, Assault, Anti-Tank, Medic, and Engineer. A number of vehicles from the era are controllable.

The original game spawned two expansions: Road to Rome, about the Italian campaign of 1943-1945, and Secret Weapons of World War II, which introduced new maps, weapons and vehicles, specifically vehicles that never went beyond the prototype stage... and also jetpacks.

Battlefield 2 moved the setting to 20 Minutes into the Future. The series later returned to World War II with Battlefield 1943, Battlefield Heroes and Battlefield V.

Tropes that apply to Battlefield 1942: