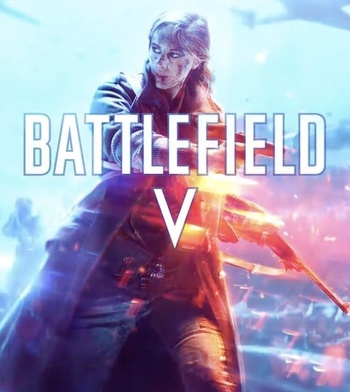 War will never be the same.
Advertisement:

Battlefield V is a First-Person Shooter in DICE's Battlefield series.

It follows on from its predecessor, Battlefield 1, and is set during World War II once again after Battlefield 1942, Battlefield 1943, and Battlefield Heroes previously covered that era. The development team placed emphasis on the campaign focusing on the "untold stories" of World War II. A battle-royale mode called "Firestorm" was also introduced into the game, featuring unique vehicles, level destruction and a literal ring of fire that slowly engulfs the play area until one team is left standing.

The game was released in November 2018. Several support & content patches were released, including maps set in the Pacific. EA announced the game's support would end in June 2020 with a minor content patch.

Tropes that apply to Battlefield V: