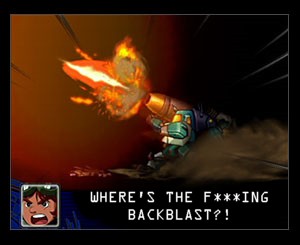 In the world of fiction, rocket-propelled weaponry create negligible, if any, backblast. The characters shown using such weapons are thus able to use rocket launchers with their backs to a wall or within an enclosed space, as if the rocket just levitates away instead of being accelerated by the thrust of a strong jet.

In Real Life, if you fire a recoilless rifle or rocket launcher in an enclosed space it will create so much pressure that you have a high chance of being killed by it. Additionally, firing them with your back to a wall will result in the hot rocket exhaust being deflected back at you and severely burning or possibly killing you. Not to mention that standing immediately behind them will result in grievous injury or death. And then there's the fact that the huge flash of flame and cloud of smoke coming out of the back of the weapon (and maybe even a big black triangular scorch mark on the ground behind you, pointing directly at you, depending on the weapon and the terrain) will probably be highly visible to anyone looking in your direction, no matter how well camouflaged you were a moment ago, so you will gain the immediate, sincere, and complete attention of everyone on the battlefield.

Note however, that this does not apply to all recoilless weapons: there are some rocket launchers which utilize some kind of "soft launch" to eject the rocket from tube before the rocket motor ignites. Others may utilize counterweight or frangible material that counterbalances the effect of recoil and/or reduces the effect of backblast. Nevertheless, many contemporary and most past rocket launchers or recoilless rifles lack these sort of features, and among their number are those that are most often portrayed in media.

See the Law of Inverse Recoil for a related weapons trope and Toasted Buns for another trope involving missing rocket exhaust. Real Life aversions may be related to Too Dumb to Live.

This trope is so common that only aversions and subversions should be listed.