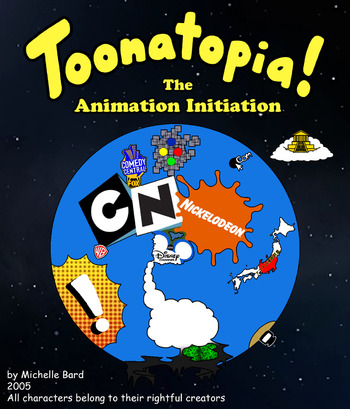 Toonatopia: The Animation Initiation is a short (41 page) fan comic by Michelle "ToonSkribblez" Bard, originally published in 2005. Read it on DeviantArt here

or on Tumblr here!

In an Alternate Tooniverse known as Toonatopia, a cartoon show's main characters must pass an initiation test before their animated series premieres. The story follows Gordon, Waffle, and Mr. Blik from Nickelodeon's Catscratch, accompanied by Lazlo of Cartoon Network's Camp Lazlo, as they go through their initiation. At first, their task seems simple enough: All they have to do to pass is bake a pie (though one with very specific ingredients they must travel in order to find) for "King" SpongeBob of the Nicktoons Kingdom. Little do they realize, however, that they've been wrapped up in an evil scheme by the king's royal adviser to conquer all of Toonatopia...