Film / It! The Terror from Beyond Space 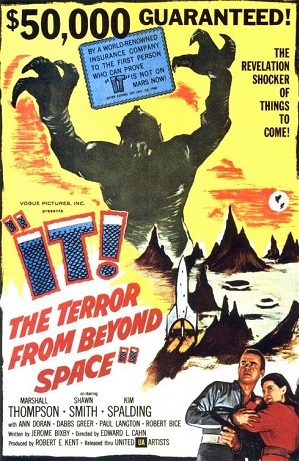 It! The Terror from Beyond Space is an independently made 1958 black and white science fiction film that was written by Jerome Bixby (who wrote such things as the short story on which The Twilight Zone (1959) episode "It's A Good Life" was based and the Star Trek: The Original Series episode "Mirror, Mirror"), produced by Robert Kent, directed by Edward L. Cahn, and released by United Artists.

On the then-far away future of 1973, an atomic rocket, the United States Space Command Challenge 141, has crashed on Mars, all hands believed lost. The second expedition to Mars, Challenge 142, has been sent to search for survivors, finding only one: Colonel Edward Carruthers (Marshall Thompson), the leader of the expedition, who says that a monster killed the rest of the crew. Believing that he was the one to perform such a massacre, the crew of the 142 arrested Carruthers and is going to bring him back to Earth, to face a firing squad.

Unfortunately for them, Carruthers is not lying, and the proof of his claims is the Nigh-Invulnerable monster that managed to sneak onto the Challenge 142 before its lift-off and is now killing the crew one by one...

If any of this "monster-on-a-spaceship" sounds similar to several plot points that would later be explored in Alien, it's not a coincidence. Scriptwriter Dan O'Bannon was a fan of this movie.