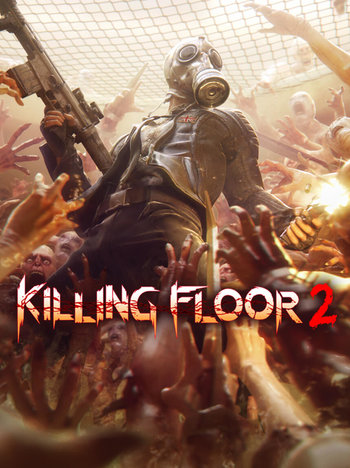 I'm back. And I've got some new tricks.
Advertisement:

In the beginning, London was reduced to ruins as someone at Horzine Labs let out some specimens who weren't supposed to end up like they ended up. So, what do you get when a containment breach occurs and the specimens run havoc in not just London, but the rest of Europe? As more people attempt to fight back specimens, someone is causing them to spread, even after the Patriarch's final death.

After the successful Unreal Tournament 2004 mod Killing Floor gained traction and became a full release in 2009, Tripwire Interactive took a couple of things learned from their other games released in the meantime, and created Killing Floor 2. The game got released as an Early Access title in April 2015, to fix bugs and receive plentiful feedback to improve on the Killing Floor formula, along with letting players experience a bit of the game before it fully launched in November 2016 on both PC and PlayStation 4, with an Xbox One port following the next August.

A VR game was released later on that somewhat uses the same engine but for VR devices called Killing Floor: Incursion. Here's the Launch

Also a short found footage film was made to market and expand a bit of the universe of Killing Floor, called Killing Floor: Uncovered. Watch it here.

I'm back, and I've got some new tropes!