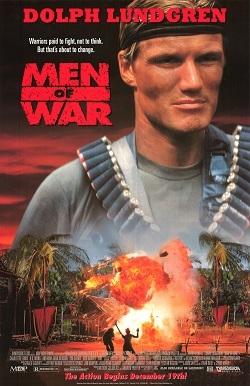 Before there was Gunnar Jensen, there was Nick Gunar.
Advertisement:

Men of War is a 1994 action film starring Dolph Lundgren. Other notable actors include B.D. Wong and a young Catherine Bell (before her debut appearance on JAG no less).

Nick Gunar is a depressed special ops soldier-turned-mercenary that is coaxed into a job by his former commanding officer, Colonel Merrick. He's tasked with leaning on a tribe inhabiting an island in the South China Sea to sell the rights to their mineral deposits. In order to do so, he rounds up a diverse band of associates well versed in the art of war.

Once they actually reach the island, things turn out to be more complicated than they initially seemed...