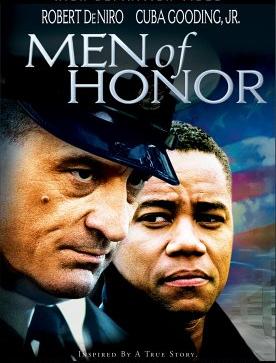 Sunday: What did your father say to you to make you try so hard?
Brashear: Be the best.
Advertisement:

It is a Based on a True Story movie about Carl Brashear (Gooding), the very first African-American Master Diver of the U.S. Navy. Brashear faces significant obstacles, including racial discrimination, his lack of education having quit school in the seventh grade to work on the family farm, and an antagonist head instructor, Master Chief Petty Officer Leslie William "Billy" Sunday (De Niro), also the man whose bravery inspired Brashear to become a diver.

Ultimately, Brashear overcomes his obstacles to become a Navy Diver, including becoming a national hero for his acts in retrieving the lost atomic bomb in the 1966 Palomares B-52 crash

, but his leg is mangled in the bomb retrieval. He has the leg amputated and then embarks on attempting to return to full active duty despite no Navy man having returned to full active duty with a prosthetic. With the help of Sunday, now a brooding alcoholic of reduced rank, but knowledgeable in the ways of bureaucracy, he not only returns to full active duty, but eventually becomes the first African-American Master Diver of the U.S. Navy.