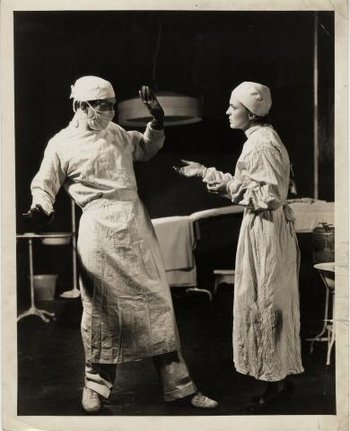 Men in White is a 1933 stage play written by Sidney Kingsley.

It is a medical drama set in an urban hospital. The protagonist is Dr. George Ferguson, an idealistic and gifted young physician and protege of highly respected Dr. Hochberg. Dr. Ferguson is talented and driven, and his medical career holds great promise. However, he has a fiancee, the lovely and charming Laura, who is getting tired of coming in second to his medical duties. Dr. Ferguson's devotion to his job threatens his relationship.

None other than Elia Kazan, who would later go on to great fame as a motion picture director, was in the original Broadway cast of Men in White as an orderly.

In 1934 Men in White was adapted into a film starring Clark Gable and Myrna Loy, directed by Richard Boleslawski, adapted by Sidney Kingsley from his own play.