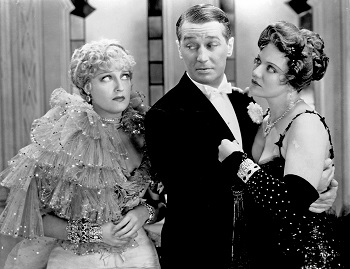 The Merry Widow is a 1934 musical comedy film directed by Ernst Lubitsch, starring Maurice Chevalier and Jeanette MacDonald. MacDonald is Sonia, the eponymous widow, who inherited her husband's vast fortune. Her husband was by far the richest man in the tiny principality of Marshovia, and Sonia now pays 52% of the country's taxes. Having completed her period of mourning, Sonia leaves for Paris. This presents a grave threat to Marshovia, which would go bankrupt if Sonia and Sonia's money leave the country. The desperate king sends Captain Danilo, a handsome and charming army officer (Chevalier) to go to Paris, romance Sonia, and get her and her money to move back to Marshovia. Romantic and comic hijinks ensue.

The Merry Widow is loosely based on a 1905 opera by Franz Lehár. This film, like the 1925 version that proceeded it, retains little of the opera's plot other than some of the names and the general idea of a rich widow and her money leaving a dinky little country. This was the fourth and last pairing of MacDonald and Chevalier.