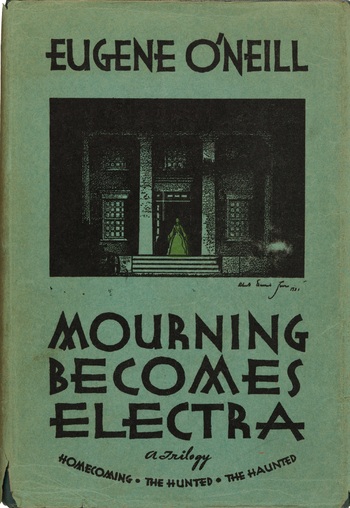 Mourning Becomes Electra is a play written by Eugene O'Neill.

The story is a retelling of The Oresteia by Aeschylus, consisting of three parts called "Homecoming," "The Hunted" and "The Haunted." Set in 1865 New England following The American Civil War, it centers around the Mannon family, who have to face their turbulent destiny in middle of a puritan society. The story narrates the return from the war of the patriarch, Ezra, to the family's enormous mansion, only to find a totally different world from the one he left behind marching into the conflict. The other members of the household are Ezra's wife, Christine, and their children— their daughter, Lavinia, and their son, First Lieutenant of Infantry Orin.

The play premiered on Broadway at the Guild Theatre, where it ran for 150 performances from October 1931 to March 1932. Lee Baker starred as Ezra, with Alla Nazimova as Christine, Earle Larimore as Orin, and Alice Brady as Lavinia. In 1947, Dudley Nichols wrote and directed a film adaptation, featuring Rosalind Russell as Christine, Raymond Massey as Ezra, Michael Redgrave as Orin, Katina Paxinou as Lavinia, and Kirk Douglas in an early role as Lavinia's suitor Peter Niles. For their performances in the film, Redgrave and Russell earned Academy Award nominations for Best Actor and Best Actress respectively.

This play and its adaptations feature examples of: