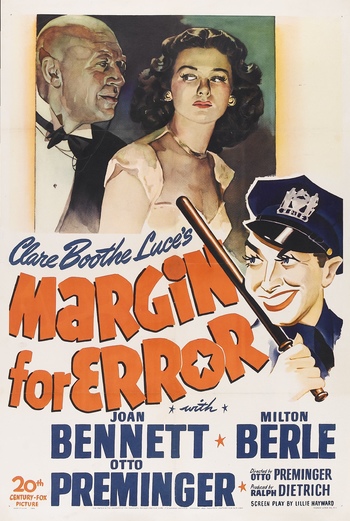 Margin for Error is a 1939 Black Comedy play (originally billed as a "satirical melodrama") in two acts by Clare Boothe Luce (author of The Women).

The action is set in the Nazi German consulate in New York City. Much to the Consul's displeasure, the building is being guarded by Jewish policemen, including Officer Moe Finkelstein. The Consul, whose name is Karl Baumer, has other problems. Anonymous admirers have been sending him gifts that smell of Bitter Almonds. A long line of distressed visitors, including Dr. Jennings, petition him to help liberate their friends and relatives from concentration camps. His Czech-American wife Sophie is having an affair with Thomas Denny, a newspaper columnist and unflappable anti-Nazi. His secretary, Baron Max von Alvenstor, seems uncommitted to the Nazi cause, unlike the Milwaukee-born German-American Bund leader, Otto B. Horst, whose posturing as the self-styled "American Fuehrer" has made himself a public shame, with Moe, for one, wanting to put him behind bars. An angry mob has gathered outside the Consulate, ready to throw things at Baumer. Last but not least, his Berlin superiors have given him a deadline to make up for the missing $250,000 that he gambled away on the stock market.

Determined to solve all his problems before he and his servants listen to Adolf Hitler's broadcast from Nuremberg at 5:00 (which is delayed as usual), the Consul plans to have Max serve as scapegoat for the money troubles and commit suicide after being exposed as a Jew, to make a martyr of Horst by framing Moe for his murder, to con Dr. Jennings into providing him with a blank check, and to blackmail Denny into giving him good press with threats against Sophie. But Moe winds up conducting a homicide investigation when he finds the Consul dead as Hitler's awful speech is still going on.

A film version of Margin for Error was released by 20th Century Fox in 1943. The film featured Joan Bennett as Sophie and Milton Berle as Moe Finkelstein, with Otto Preminger (who also directed) reprising his stage role as the Consul.