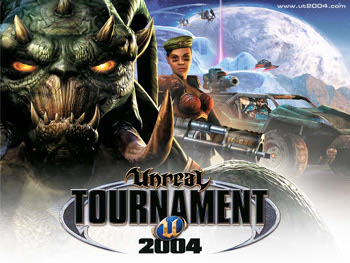 "The Liandri Corporation's Unreal Tournament enters its twelfth year as a legally sanctioned competition. This year's tournament is the most highly anticipated yet, with teams captained by highly regarded former champions Malcolm, Gorge, and the long absent Xan Kriegor, as well as a dangerous team from the Skaarj Empire."
—Unreal Tournament 2004 introduction
Advertisement:

Unreal Tournament 2004 is a multiplayer-based First-Person Shooter videogame co-developed by Epic Games, Digital Extremes, Streamline Studios and Psyonix and released in 2004 for the PC. It's the sixth entry in the Unreal series, succeeding Unreal Tournament 2003.

Like in the prior game, you must build a team and destroy all opposing teams in order to beat the Final Boss and their team at the end of the Tournament in order to crown yourself champion. However, there were many changes introduced: for starters, Gorge (one of the many player characters of 2003), leading his team Juggernauts, dethroned previous champion Malcolm in the past Tournament by beating him in the finals. This led to a public confrontation between Malcolm and his teammates, Brock and Lauren, who split up and reformed their previous team, Iron Guard. Malcolm, on the other hand, reformed Thunder Crash with most of the original lineup plus some new faces. The Skaarj, this time full-blooded ones, are also participating with an own team in the Tournament, led by the ClanLord. And last, but definitely not least, Xan Kriegor, the former reigning champion and Final Boss of Unreal Tournament, is back, and has reformed his team, The Corrupt, in order to take the championship back.

The game is considered by the development team as the "full" version of 2003, containing all the content of Unreal Tournament 2003 and its two Bonus Packs, plus five new weapons (the Mine Layer, the Grenade Launcher, the Anti-Vehicle Rocket Launcher or AVRiL, a new version of the Sniper Rifle and the Target Painter) for an impressive 17-weapon count, four new gamemodes, 35 new characters (with six more added by way of the ECE Bonus Pack) and four new teams, and at least 54 new maps, with 15 more maps being added via Bonus Packs. The campaign also saw quite the refit, with money being added to it allowing you to change the next combat arena as well as betting on one-on-one matches and hiring newer and better teammates.

The game has the same gametype lineup as 2003 plus four new modes, marked with (*):

The game saw far greater acceptance than UT2003 and is mostly thought of as a very worthy successor to the original UT.

Notable UT2004 mods with their own page are: