Film / Die Hard with a Vengeance 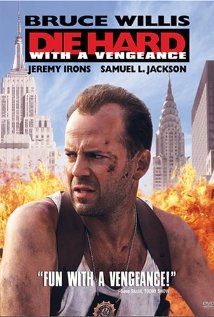 Die Hard With a Vengeance (1995) is the third film in the popular Die Hard franchise, which reteamed Bruce Willis with John McTiernan, the director of the first film.

After being suspended for alcoholism, John McClane is put back on duty when a bomb destroys a department store in New York City, and a man named "Simon" claims responsibility. Simon demands that McClane wear a sandwich board with a racist remark on it and walk into the middle of Harlem in order to prevent further attacks. McClane does so, and is barely saved by the intervention of a local business owner, Zeus Carver (Samuel L. Jackson). Together, the duo are forced to take part in a series of malicious tasks set up by Simon, who threatens to set off several more bombs if they aren't completed in time. While the pair is solving the riddles, they realize that it's a distraction from the real threat - Simon (Jeremy Irons) is planning to rob the Federal Reserve Bank, and he has a much closer connection to McClane than the cop realizes...

Vengeance was adapted from a spec script called Simon Says, which was originally intended to be the third installment of the Lethal Weapon series before it was reworked to include McClane and Zeus.