Going by the Matchbook 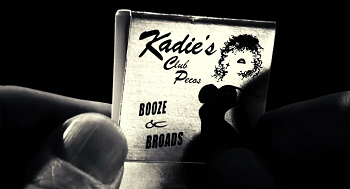 Cowley: Conroy was a pro. Clean as a whistle.
Bodie: What, no book of matches with a nightclub name on 'em?
— The Professionals, "Involvement"
Advertisement:

A staple of mystery- or Film Noir-themed shows: a lead on a missing person is provided by a branded matchbook indicating a bar they've visited.

In the old days, back when people cared more about looking cool than smelling fresh, everyone smoked; accordingly, every diner, hotel, or bar would have a basket of logo-stamped matchbooks by the door that patrons would just instinctively shove into their pocket. This is a reasonable (if cliché) clue for stories set in the '40s (e.g., Film Noir). In some cases, the blank interior of the matchbook might be used to jot down a phone number or other information, which inevitably turns out to be a useful lead.

Since then, smoking has become much less common than it was in most countries, public and indoor smoking are increasingly banned, and those who do smoke are more likely to use lighters than matches. Accordingly, branded matchbooks are much less common. However, other forms of advertising merchandise are still common (such as branded pens), keeping the spirit of the trope alive even after the matchbooks themselves disappeared from public recognition.

In fiction, no one ever shares matchbooks with a friend or acquaintance. Once it's in your pocket, it's locked there like a Clingy MacGuffin, a permanent memento of your journey.