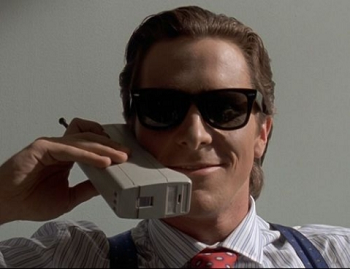 Once upon a time, cell phones served as a status symbol. In The '80s, when they had just been invented and were both too bulky and too expensive for widespread use, carrying a cell phone was a shorthand for high status and wealth. Businessmen were always bound to show up with one. (The earliest examples of this variation on the trope use a beeper instead, but the intent is the same: to show that the owner is important and needed.)

In The '90s, as mainstream cell phone ownership was starting to take root, their role as a status symbol in media evolved. Sure, anyone might own one, but only the wealthiest had the ultra-advanced camera phone decorated with gems and a super fast internet connection. Special attention was paid to the brand and the utilities of the phone denote the character's status, making it ripe for Product Placement. Expect the Rich Bitch and the Phoneaholic Teenager to show up with one.

This trope is really dying out in today's day and age. Nowadays, cellphones have become so mainstream and so much more affordable that it's basically expected for someone to have one, and having a top-of-the-line model doesn't really mean that much anymore either—especially since it's probably got at least a dozen nearly identical competitors and is only an incremental upgrade to phone's previous model anyway. Certain brands still play it straight to a point, but if the trope appears in contemporary fiction it's likely to be either satire, parody or deconstruction. A contemporary variant is for a character lacking a cellphone to be more notable, signifying poverty, being out-of-touch (especially if they're elderly), or technophobia.

Subtrope of Technology Marches On.