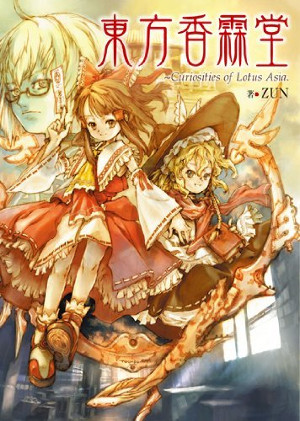 Cover of the compilation release
"The history of Gensokyo was born the moment I began writing this book."
— Rinnosuke Morichika
Advertisement:

In addition to the main Touhou Project video game series, and strangely overshadowed by the franchise's own fanfiction, are a number of canon Spin Offs including comics and other print materials. Touhou Kourindou ~ Curiosities of Lotus Asia is the first of these, a series of short stories published in various magazines from 2004 to 2007. In 2015 it received a Revival in the first issue of official Touhou magazine Strange Creators of Outer World.

Rinnosuke Morichika is a long-time friend of Reimu and Marisa, the protagonists of the game series, but they don't have much in common. For one thing he's a noncombatant who concerns himself mostly with the issues of daily life and running a shop rather than investigating strange incidents. For another he's a he.

Rinnosuke is half-human, half-youkai, with the perks of both races and few of their weaknesses... but despite this he is not very strong and doesn't take part in Spell Card duels. Rinnosuke once worked for Marisa's father as a shop assistant, but has since set up a premises of his own - Kourindou, a curio shop built just outside the Forest of Magic, stocked mainly with items that have drifted into Gensokyo from the Outside World. While intended as a location accessible to both humans and youkai, in practice it's too out-of-the-way for many customers to travel there. Not that Rinnosuke really seems to mind, since only about half of his "merchandise" consists of things that he's actually willing to sell. Rinnosuke possesses a special power that tells him the name and purpose of any tool he can see... but not how they work, and as a result his shop is littered with pieces of technology that he can't figure out how to use.

Something of an armchair philosopher, Rinnosuke will frequently stop his narration in order to give his observations on metaphysics or current events... observations which are often comically inaccurate.