Literature / Tour of the Merrimack 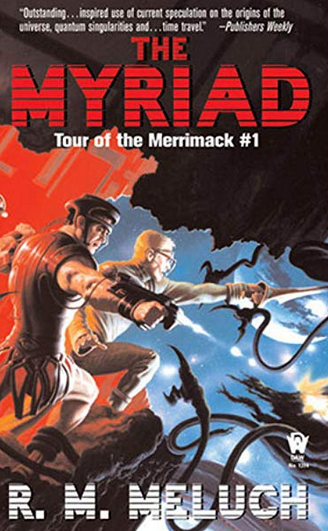 Tour of the Merrimack is a Military Science Fiction series by R. M. Meluch.
Advertisement:

In the future, America is at war with Palatine, a rebellious interstellar colony that models itself after ancient Rome and in fact claims to be its successor. The new Roman Empire seeks to reclaim their ancestral home of Earth; the military forces of America seek to return Palatine to its status as a subserviant colony world. However, both sides are taken by surprise when they are attacked by the Hive: an alien lifeform of boundless hunger which consumes world after world.

John Farragut is the captain of the Merrimack, the first ship to ever survive an attack by the Hive. He and his crew are charged with hunting down the Hive's homeworld and finding a way to destroy the voracious alien horde. Reluctantly assisting them is Augustus, a Roman who has been cybernetically altered to possess computer-like information processing ability.

The Merrimack heads into the Deep, further from colonized space than anyone before it. The Hive is out there... and it's hungry.

The Tour of the Merrimack series currently consists of six books: