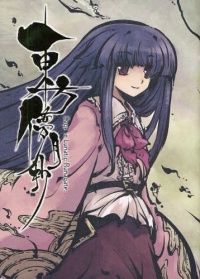 Cover of Cage in Lunatic Runagate
In addition to the main Touhou Project video game series, and strangely overshadowed by the franchise's own fanfiction, are a number of canon Spin Offs including comics and other print materials. Bougetsushou (literally "Ephemeral Moon Vignette") is the second manga entry in the Touhou Project franchise, a sequel to the 8th game Touhou Eiyashou ~ Imperishable Night (Eiyashou meaning "Eternal Night Vignette") that delves more into the motives and Back Story of that game's Lunarian antagonists. Bougetsushou is notable for being the only piece of Touhou fiction to focus on a single overarching story without any episodic elements.
Advertisement:

Now it seems that Yukari is gathering allies to try it again. But she's not the only one - Remilia Scarlet has declared her plan to build a spaceship and beat Yukari to the punch. Rumors are stirring on the moon that Eirin Yagokoro is planning a rebellion, causing her former pupils to come under suspicion. And for the second time, a panicked Moon Rabbit has fled to Earth.

Touhou Bougetsushou consists of three works, which ran alongside each other in different manga magazines: