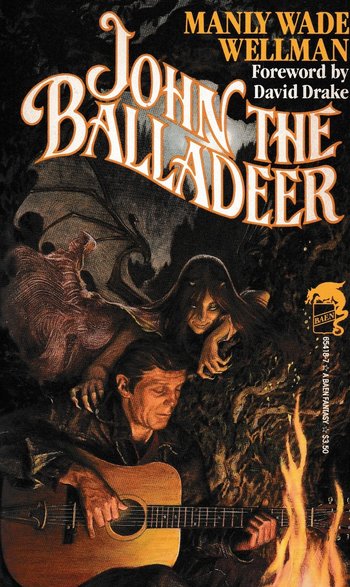 Silver John on the cover of the John the Balladeer short story collection.
A series of Dark Fantasy stories by Manly Wade Wellman about a traveling musician named John who frequently finds himself battling supernatural menaces in the deep backwoods of Appalachia. Wellman had already written other Occult Detective stories, demonstrating a talent for weirdness and a quirky sense of humour, but these stories are additionally enlivened by Wellman's enduring interest in the folklore and folk music of backwoods America.
Advertisement:

The series has no official overall title, but is usually called the "Silver John" (referring to John's silver-stringed guitar) or "John the Balladeer" series. Neither of these names is ever used in the series to refer to the protagonist, who is always just plain John.

The series includes both short stories and novels:

It inspired a movie, The Legend of Hillbilly John, in the 1970s.