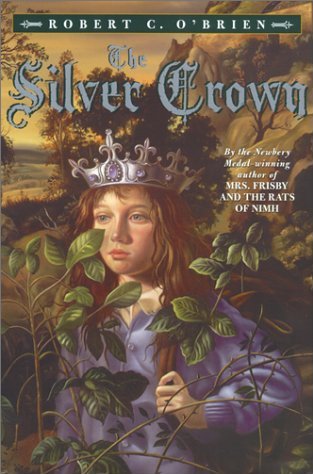 All that glitters...
"It lay beside her on the pillow, shinier than silver, glowing softly, with twinkling blue stones set all around....It did not occur to her to wonder from whom it had come; she was merely aware that it was hers by right."
— Robert C. O'Brien
Advertisement:

A novel for young adults/ children by Robert C. O'Brien, author of Mrs. Frisby and the Rats of NIMH and Z for Zachariah. First published in the UK in 1968, with slight edits made to subsequent printings and the US version that changed the final chapter.

Ellen Carroll awakens on her tenth birthday to find a mysterious silver crown on her pillow. Delighted with the present, she sets off for the local park to play pretend as a queen. Upon returning she finds her house has burned down and her family is gone. Frightened and alone, Ellen decides the only course of action is to make her way to her Aunt Sarah's home in Kentucky, which is four hundred miles of mountainous terrain away.

Opting to hitchhike, Ellen ends up in a car driven by a mysterious man who tries to kidnap her. Fleeing from him on foot she meets Otto, a young boy who joins her on her quest to reach Aunt Sarah's home. But their journey is fraught with peril, as they encounter a strange hidden castle inhabited by evil minds and a vile force to which all who enter the castle fall prey—all, except for Ellen. It's up to Ellen to harness the power of her silver crown, conquer the evil force within the castle, and rescue its hapless victims before it's too late.

The Silver Crown contains examples of: