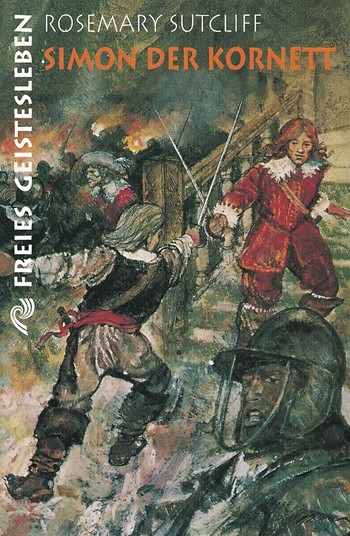 "Oh God I thought this was the English Civil War! Did I take a wrong turn at St. Albans?"note Pictured: the German edition.
Simon is a 1953 Young Adult Historical Fiction novel by Rosemary Sutcliff.
Advertisement:

The outbreak of the English Civil War severs the lifelong friendship of Simon Carey, a principled Parliamentarian, and Amias Hannaford, a passionate Royalist. At sixteen, Simon enlists as a cornet of cavalry under Fiery Tom Fairfax in the New Model Army, while Amias disappears to join the King's forces. As the tide of the war turns against the Royalists, Simon finds himself once more in his native West Country, destined to meet Amias again on opposite sides of battle.