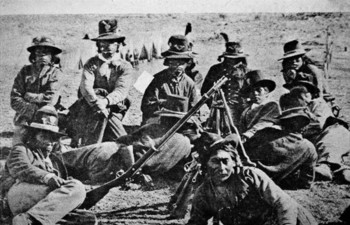 The Warm Spring US Indian Scouts in the Lava Beds during the Modoc War
Advertisement:

The Army Scout is a stock character in Western fiction. Armies maneuvering in pursuit of Indians or enemy forces (such as during the Mexican and Civil Wars) commonly relied on local auxiliaries with knowledge of the area to scout in advance of their arrival. These scouts generally were either cavalry soldiers operating in small groups, or civilians hired on a temporary basis. Indians were often hired due to their extensive knowledge of fieldcraft and their familiarity with local languages and customs.

Due to his need to move swiftly, the scout is a Fragile Speedster that carries little equipment. This is often translated into poor Hit Points and offensive power, and emphasizes that the scout is not a primary combat unit.