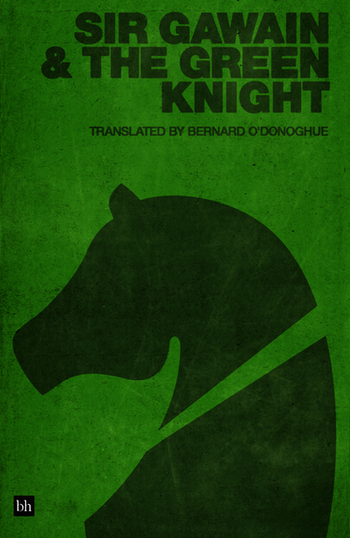 Silence fell in hall
such wonder for to see,
for man and horse and all
were green as green could be.
Advertisement:

Sir Gawain and the Green Knight is a late 14th-century Middle English alliterative Chivalric Romance. A part of the Arthurian Legends, this tale revolves around the eponymous Sir Gawain accepting, and completing, a challenge presented by the Green Knight, who mysteriously appeared in Arthur's court during Camelot's New Year's Day feast.

In the tale, the knight challenges Arthur's court to a game: any of the knights there at the Round Table could strike the Green Knight one blow with an axe. In return, the knight would have to allow the Green Knight a similar blow in one year's time. Arthur's knights are hesitant to agree to such an obvious trap. In response, The Green Knight casts aspersions on their manhood and chivalry, at which point Arthur himself steps up to take the challenge. Gawain, knowing that he's much more expendable than the King himself, does the noble thing and jumps up to take Arthur's place.

Gawain's axe blow strikes the Green Knight's head clean from his shoulders. Surprisingly, the Knight's body remains standing. It retrieves the head, which informs Gawain that he has an appointment at the Green Chapel in one year's time, and exits.

Fast forward to late next year, and Gawain is off on a long and arduous search for the Green Knight's castle. After a long time wandering, and with New Year's fast approaching, Gawain comes to the castle of Lord Bertilak, who cheerfully informs Gawain that the Green Chapel is less than two miles away. Relieved, Gawain accepts Bertilak's offer of hospitality.

Bertilak plans to go on several hunting trips during the week to come, but Gawain is still exhausted from his journey, so they strike a bargain: Bertilak will hand over whatever he catches during the day to Gawain, and Gawain will share "whatever fortune he achieves" in return.

The next day, Bertilak goes hunting. Gawain, sleeping late, finds the beautiful Lady Bertilak climbing into bed with him. Gawain thinks she is beautiful but only talks with her, nothing more. In the end, Lady Bertilak demands a kiss from him. Gawain heartily agrees, and the two kiss.

At the end of the day, Bertilak offers the deer he killed to Gawain, who repays his host with a kiss. Bertilak asks where he won it, but Gawain declines to say.

The next day Lady Bertilak again comes to Gawain, and more directly attempts to seduce him. She plays on his attraction to her, his reputation as a bit of a ladies' man, and his chivalric obligations to his hostess. He resists on all fronts except for two kisses which he and the lady exchange.

The first evening's events are repeated, with Bertilak giving Gawain a boar and Gawain returning two kisses, much to the amusement of Lord Bertilak, who exclaims that Gawain is making an excellent profit off their arrangement.

The third day, New Year's Eve, is like the first two. The Lady has become direct about her intent towards Gawain, who refuses to sleep with her despite his desire for her. The Lady offers to give him a gold ring; Gawain refuses, saying that he has nothing to give in return. Then she offers him her girdle of green silk, which bears a strong enchantment: none who wear it can be killed. This appeals not only to Gawain's romantic feelings toward the Lady, but also to his sense of self-preservation; he accepts that gift.

That evening, Gawain exchanges three kisses for the fox that Bertilak has caught but keeps the girdle a secret, hoping that it will save his life, since he will meet the Green Knight the next day.

On New Year's, Gawain rides to the Green Chapel, refusing to back out of his duty even if it kills him. The Green Knight is happy to see Gawain, and they get down to the axe-hewing.

The Green Knight strikes at Gawain's neck, but pulls the axe away at the last moment when Gawain flinches. He mocks Gawain for his fear. Gawain angrily declares that he will not move an inch. The Green Knight lifts the axe a second time, but he deliberately misses again, much to the frustration of Gawain, who understandably would rather have all of this beheading business over with.

The third strike misses Gawain again, except for a slight scratch on the side of Gawain's neck. The Green Knight then reveals that he is Lord Bertilak, and that the first two misses were in honor of the first two nights of their arrangement, which Gawain met honorably and in full. The third stroke, scratch and all, was for the third day—and the belt which Gawain is wearing, which he tried to keep secret from Bertilak.

The entire arrangement, Lady Bertilak's attempted seduction and all, was part of Morgan le Fay's Evil Plan to embarrass Arthur's court. But instead Gawain had proven himself almost entirely perfect, much to the enchantress's dismay. Gawain keeps the green girdle as a reminder of his cowardice in trying to escape his duty through magic. Bertilak is well pleased with Gawain's performance—his only fault was the desire not to die.

The test of character by "beheading dare" is found earlier in the Irish legendary romance Bricriu's Feast. The poem has been translated by, among others, J. R. R. Tolkien. It was not adapted by Sir Thomas Malory into his Le Morte d'Arthur for unknown reasons, though some of the prior sources he did use are dated to the same period, as well as later and older, sometimes much older material.

A film adaptation based on the tale called The Green Knight starring Dev Patel as Gawain was released on July 30, 2021.