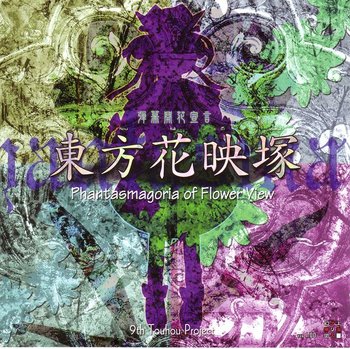 The second attempt at something more multiplayer.
Advertisement:

Touhou Kaeidzukanote "Flower Viewing Mound" ~ Phantasmagoria of Flower View is a video game created by Team Shanghai Alice for Windows computers in 2005. It's the ninth installment in the Touhou Project franchise.

Spring has come to Gensokyo, but the flowers that bloom are those of every season at once. Sixteen characters set out to figure out what's going on.

The otherwise unofficial fancomic compilation Touhou Shikoubana ~ Seasonal Dream Vision includes a Short Story prologue to this game titled A Beautiful Flower Blooming Violet Every 60 Years, told from the perspective of Yukari Yakumo (who did not appear in the game itself).