Literature / The Tournament of Supervillainy 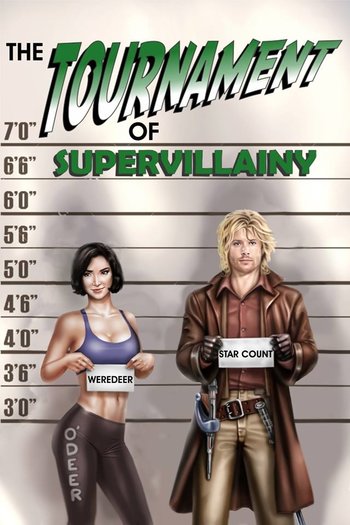 It's a Crisis on Infinity Secret Wars.
Advertisement:

The Tournament of Supervillainy is the fifth novel of the The Supervillainy Saga by C.T. Phipps.Gary Karkofsky is having a bad time of things due to the events of The Science of Supervillainy. Having released Gabrielle Anders a.k.a Ultragoddess as well as a huge number of supervillains, he's hated on both sides of the superhero/supervillain divide. Worse, the Society of Superheroes has made it their personal mission to deliver as many No-Holds-Barred Beatdown attacks as humanly possible.

Things go from bad to worse when he receives an announcement from Death that the Eternity Tournament is taking place soon and he's been chosen to represent her...along with a few of his closest friends plus some Guest Fighter characters from the author's other works. The problem is the favored pick for winner is Entropicus, a Dimension Lord who wants nothing less than to unmake reality.

Which is something he can do if he wins the tournament and receives the prize: The Primal Orbs that can grant any wish.

The Tournament of Supervillainy is a self-admitted Homage to Mortal Kombat, Dragon Ball, big epic crossover fiction, and Enter the Dragon with all the Shout-Out(s) this premise requires.