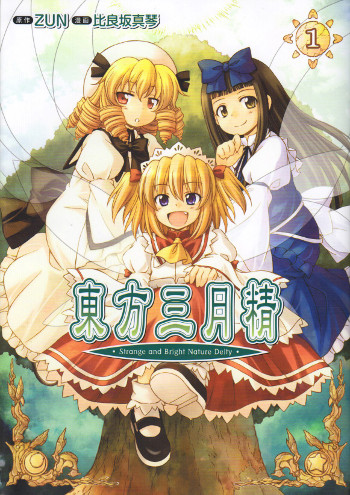 From left to right: Luna, Sunny and Star
In addition to the main Touhou Project video game series, and strangely overshadowed by the franchise's own fanfiction, are a number of canon Spin Offs including comics and other print materials. Sangetsusei is the first manga entry in the Touhou Project franchise. Like Curiosities of Lotus Asia before it, it is a Slice of Life story that focuses more on world-building than the Gensokyo-threatening "incidents" of the games.
Advertisement:

Sunny Milk, Luna Child and Star Sapphire are the Three Fairies of Light, a group of mischevious Nature Spirits who live in the Forest of Magic (and later, the grounds of the Hakurei Shrine). With boundless enthusiasm and childlike intelligence, they have a tendency to get in over their heads, though they will often encounter people who are willing to help them out... or punish them for their shenanigans. Reimu Hakurei and Marisa Kirisame, Player Characters of the main game series, serve as secondary protagonists.

Over the course of its run, Sangetsusei has been published under four subtitles:

Each volume of the manga comes with a short CD featuring music related to the characters.

Sangetsusei eventually received its own game, Yousei Daisensou ~ Touhou Sangetsusei, in which Cirno sets out to punish the Three Fairies of Light for destroying her igloo. Unusually the art for this game was drawn by Makoto Hirasaka rather than ZUN himself.