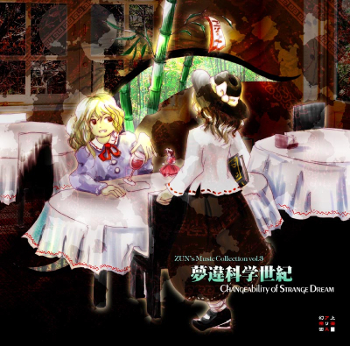 Maribel on the left, Renko on the right
"There's two ways for me to help her: First, I could throw the stuff away and convince her that it was all a dream or a hallucination. That way she won't bring the dream world into this one again; dream and reality stay separate things. And the second... is to convince her that she really was in another world, and awaken her from the dream. That way, she wouldn't die in that dream world without knowing the truth. But if I did that, she might not be able to come back... Which is best for Mary? What should I do? The answer is obvious."
— Renko Usami, Changeability of Strange Dream
Advertisement:

In addition to the main Touhou Project video game series, and strangely overshadowed by the franchise's own fanfiction, are a number of canon Spin Offs including comics and other print materials. ZUN's Music Collection is a set of instrumental albums consisting of songs from Touhou Project, Seihou and related works (often heavily rearranged), as well as original compositions. Accompanying each album is a short story, with one segment matched to each track.

From the second album on, these stories follow the adventures of Renko Usami and Maribel "Mary" Hearn, a pair of college-age "necromancers" who interact only vaguely with the rest of Touhou's cast and setting - not only do they live in the "normal" Japan outside of Gensokyo, but their stories are set an unspecified amount of time in the future. The Sealing Club, as they call themselves, spend most of their time hunting for the supernatural, with the aid of Renko's ability to tell the time and location from the stars, and Maribel's ability to see boundaries. Over the course of the series Maribel's powers over boundaries grow stronger and stronger, and she is implied to have some connection to Gensokyo's founder Yukari Yakumo (or even be Yukari at a younger age).

Despite their less overtly supernatural setting, the album stories are one of the darkest parts of Touhou lore, with themes of loss, fate, and insanity. Likewise the songs themselves (even the remixes) are often grim and creepy, to the point where ZUN described the first album as "un-healing music".

All volumes are available for purchase on iTunes worldwide, and can be streamed on Spotify as well as YouTube Music with a Premium subscription. However, Dr. Latency's Freak Report was delisted from the US iTunes Store in late 2020 for unknown reasons.

Translation: Changing Dreams in the Age of Science ~ Changeability of Strange Dream