This page is for Touhou characters who debuted in Touhou Youyoumu ~ Perfect Cherry Blossom.
open/close all folders
Letty Whiterock

Youkai of Winter
Letty Whiterock
"If you can only sleep in warm weather, then you're like us and the Asebi flowers."

A Yuki-onna and stage 1 boss. She is only ever seen during the winter, and goes into hibernation as spring arrives. While she attacks the heroines for attempting to end the long winter, she's only half-serious as she has already accepted that spring must eventually come.

The Black Cat of Evil Omens
Chen
"Uh... what? This is our home. Get out of here now!"

A nekomata youkai and shikigami to Ran Yakumo. As her own master is also a shikigami, this means that she too is a servant to Yukari Yakumo.

Stage 4 Mid-Boss, a fairy who heralds the coming of spring. For some reason, the only way she knows how to do so is with a shower of danmaku. Despite a few appearances and descriptions throughout canon, she generally shows up as a one-note character with no dialogue, though her enthusiasm is hard to miss.

Layla Prismriver is one of the daughters of Count Prismriver who could not bring herself to leave their home after he tragically died in an accident, and his orphaned daughters each went their separate ways. Instead, she invoked powerful sorceries in order to create three poltergeists with the appearance and personalities of her three older sisters. Layla and her sisters have long since passed away before the events of Perfect Cherry Blossom.

While Layla has no official appearance, what little fanart of her exists almost universally depicts her with long green hair to complement her sisters' colors.

The Poltergeist Violinist
Lunasa Prismriver
"Unwanted noise like you should be drowned out."

The eldest of the Prismriver trio, who specializes in stringed instruments. Lunasa is an honest, hard-working, honor student type who is nevertheless pessimistic in general.

The Poltergeist Trumpeter
Merlin Prismriver
"No dish has ever escaped my performance alive."

The middle sister of the Prismriver trio, who specializes in wind instruments. Merlin is energetic and easily excitable. She possesses greater raw power than her sisters, but lacks precision and control.

The youngest of the Prismriver trio, who specializes in percussion and keyboard instruments. Lyrica is very intelligent, but dislikes exerting effort, so she usually tries to trick her sisters into fighting for her. 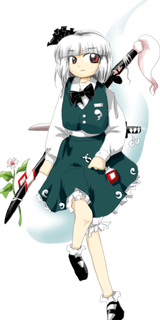 The Half-Ghost Gardener
Youmu Konpaku
"The things that cannot be cut by my Roukan-Blade, forged by youkai...are close to none!"

Swordswoman and gardener of Hakugyokurou, the Netherworld court. She's half-human and half-phantom, half-dead and half-alive, half-illusion and half-reality, and altogether half-baked. She is Yuyuko's faithful servant, but her seriousness and naivete contrasts with her mistress's whimsical and carefree nature. She is the one who has been stealing the essence of spring from Gensokyo in Perfect Cherry Blossom, under orders from Yuyuko.

Youmu Konpaku's father (or possibly grandfather) and mentor, who served as Hakugyokurou's gardener before her. He disappeared sometime before the events of Perfect Cherry Blossom, which Youmu took to be just another one of his lessons. Strictly appears only in Youmu's character description for Perfect Cherry Blossom. 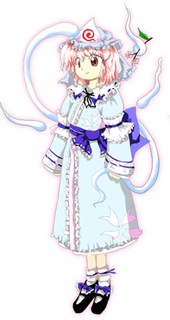 Ghostly Girl in the Netherworld Tower
Yuyuko Saigyouji
"In a gathering of corpses, there is beauty. Same goes for the cherry blossoms and spring..."

Ghost Princess of Hakugyokurou, also an old friend of Yukari. When she was still alive she had the power to control the spirits of the dead. Eventually this grew into the power to kill others with a thought, terrifying Yuyuko to the point of suicide, after which her body was used to seal an evil cherry tree. Over time, she forgot about her life and hatched a plan to resurrect the body sealing the tree. When she realized that it was her own body that sealed the tree, she changed her mind and lived her life as a ghost, perhaps for the better, because the resurrection of her body would destroy her and unleash the evil tree. 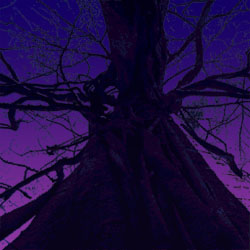 An evil cherry tree sealed by Yuyuko and Yukari centuries ago. Up until Ten Desires it was the only truly evil character in the Touhou universe. It has the power to lure people to rest underneath its branches after which it drains their souls. 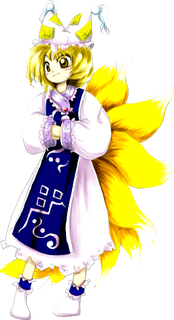 Shikigami of the Youkai of Boundaries
Ran Yakumo
"Don't mistake me for a simple beast either. I am the shikigami of a powerful master. As such, my powers far exceed those of any youkai you've ever seen... Not to mention those of humans. Or dogs."

A kitsune, Yukari's beleaguered but loyal shikigami, looking after the house and her duties while her mistress sleeps. A grand youkai in her own right, she is wise and strong, old enough to possess a full set of nine tails and is powerful enough to have her own shikigami, Chen. 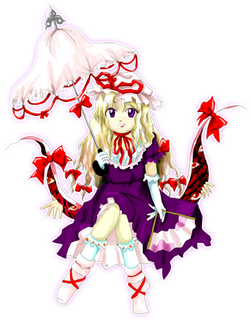 The mysterious "youkai of boundaries" and one of the most powerful beings in Gensokyonote Exactly how powerful is vague, as most of the information on Yukari's abilities comes from Yukari herself, but she's crafty enough to outwit most of the entities stronger than her anyway. - her signature "gaps" allow her to travel almost anywhere (including the Outside World), her Onmyōdō skills let her find out almost anything, and she's no slouch in combat either. She tends to mess around with people or use them as pawns in her schemes, but most of the time she has the best interests of Gensokyo at heart. It's heavily implied that Yukari was one of the architects of the Great Hakurei Barriernote The actual crafting of the barrier was a massive effort involving large numbers of youkai and humans., and she will quickly show up to repair it if damaged. However, as she sleeps through the day and hibernates through winter, she leaves most of her work to her shikigami Ran. Yukari is an old friend of Yuyuko, and the closest thing Reimu has to an employer.