So far Reimu, Marisa, Alice, and Yuuka are the only characters to have appeared in the Windows series, albeit with significant changes from their original incarnations. After a history of inconsistent statements on the topic, ZUN has confirmed in an interview

that the PC-98 games are canon except when contradicted by later games.

This page is for Touhou characters who debuted in Highly Responsive to Prayers, Story of Eastern Wonderland, Phantasmagoria of Dim.Dream, Lotus Land Story, and Mystic Square.

Debuted in Highly Responsive to Prayers

The gatekeeper to Hakurei Shrine, and the first boss in the entire series. Very little is known about Shingyoku, as it has neither dialogue nor an official profile.

A generic boss Reimu encounters in the Makai, YuugenMagan is a set of five independently moving eyes that are connected by electricity. 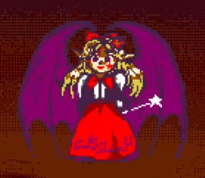 Elis is the second boss Reimu faces in the Makai. She is a blonde girl that has devil wings, can turn into a bat, and carries a wand. Little else is known about her. 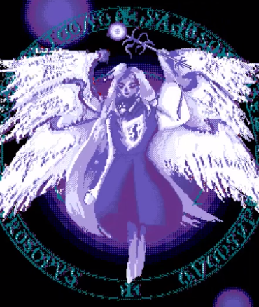 Sariel is an angel of death and the Final Boss of the Makai route. 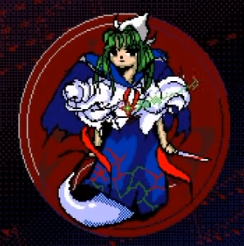 As seen in Highly Responsive to Prayers

A vengeful spirit whom Reimu originally ran into during her trip into Jigoku. She later reappeared in Gensokyo, trying to get revenge on not just Reimu, but all people. After being shot down a second time, she gives up being evil and spends her time hanging around the Hakurei Shrine and making fun of Reimu. 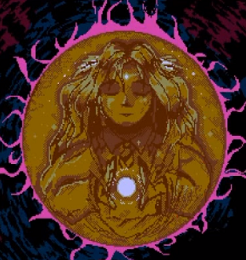 The second boss Reimu meets in Jigoku, Kikuri is a bronze disk. Okay, there's an image of a girl on the disk, but it's still pretty strange. 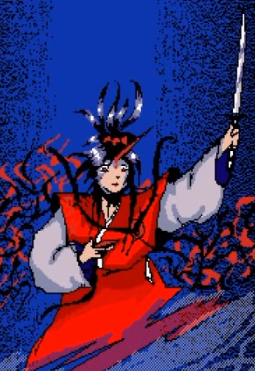 Konngara is the Final Boss of the Jigoku route.

Debuted in Story of Eastern Wonderland

An old turtle who serves as Reimu's transportation (since she hadn't yet learned how to fly under her own power), and on occasion attempts (unsuccessfully) to be her mentor, or at least give her advice. Disappeared without a trace after Mystic Square, though Word of God has stated that he's "probably living in the lake at the back of the shrine".

Bakebake
A recurring enemy in the PC-98 era, particularly in the early stages. They were also artificially created by Rika.
Rika

Some sort of scientific genius. Before Story of Eastern Wonderland she creates a bunch of monsters and ghosts and decides to hang out at the Hakurei Shrine while Reimu was gone. Naturally, she gets her ass kicked. She later challenges Reimu on more even grounds riding the Evil Eye Sigma. First boss in a Touhou shooting game, and first extra stage boss.

Unnamed Humanoid
A humanoid who's the midboss of stage 2 in Story of Eastern Wonderland.
Meira

Attacks Reimu in an attempt to get the Hakurei powers for herself. Fails, and is never heard from again.

A flying tank built by Rika. Noted for being the first Extra-Stage Boss and being rather difficult to destroy.

Debuted in Phantasmagoria of Dim. Dream 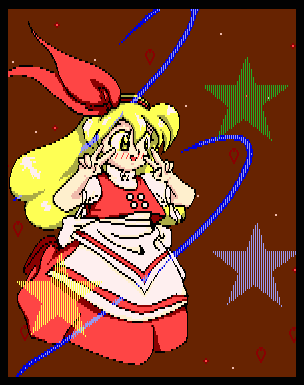 "You reek of magic~. You're using famous spells too."

A witch that's eternally young in both body and mind. 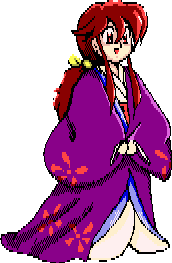 A princess dreaming of beauty in danmaku
Kotohime

A princess, who is also a cop. Yeah, she weirds out pretty much everyone she meets, and not just because of her occupational choices. 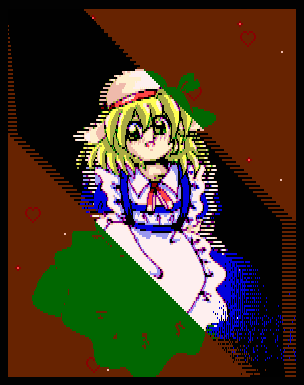 "Looks like there's nothing but weird people around here."

A poltergeist produced by an unstable girl. She normally haunts a western mansion, but the owner has gotten used to her, so she's bored. 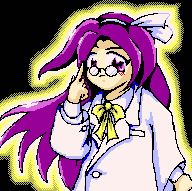 "Why do you hold such an interest in magic when you already possess such a magnificent power?"

A rare inhabitant of Gensokyo that values science above magic. Despite this, she's actually a very powerful magician. 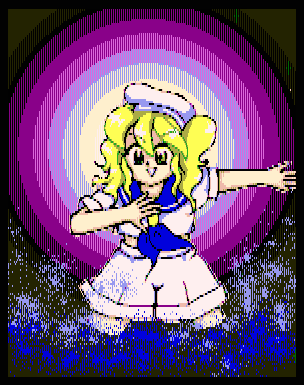 Resident of fantasy that runs through time
Chiyuri Kitashirakawa

Chiyuri is Yumemi's assistant and mostly spends time collating her research data. She also put out the fliers advertising the contest to reach the center of the "ruins" that recently appeared in Gensokyo. She doesn't always have a clear idea of what her boss intends, which results in her getting whacked over the head when she treats the contest winner rudely (read: threatens them with a gun). Yumemi then orders her to fight the heroines in order to collect more data. Oh, and her major is in "comparative physics". Whatever that means. 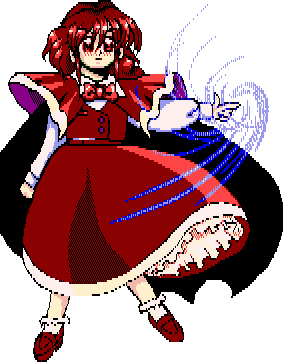 "I want to take you home and make you my guinea pig, and learn all the secrets of your power and make it mine!!"

Yumemi is a professor of "comparative physics" at a university in another dimension where all natural forces have been explained by a Grand Unified Theory. When she dares to suggest that the theory doesn't explain magic, she is laughed out of the university and sets off on a journey to prove that it exists. Her ship lands in Gensokyo to capture someone to use in her experiments. Asskicking ensues and she leaves empty-handed. In spite of her disappointing failure, she still rewards the heroines generously.

When (and if) Reimu beat Yumemi, she asked for an assistant who could handle all of the day-to-day chores around the shrine. What she got was a nuclear-powered robot maid who isn't necessarily good at her job. After this, Ruukoto was never seen again.

A mountain youkai that gets attacked by the player character for no particularly good reason.

"Anyway, I'll show no mercy to anyone who tries to pass through, whether they're a shrine maiden or not!!"

A vampiress that attempts to stop the player from reaching the island in the lake filled with blood.

Mirror-like Being
The third midboss of Lotus Land Story.
Elly

The Porter of a Mansion
Elly

The gatekeeper to Yuuka's mansion. She's completely useless at her job, letting both Reimu and Marisa by. Not that Yuuka even needs a gatekeeper, considering her own power and how isolated her mansion is... 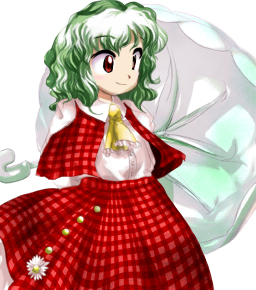 "It doesn't matter if you're a god, power is everything!"

An old and extremely powerful flower youkai first found living in the dream world, Mugenkan, and currently inhabiting the Garden of the Sun. She is sleeping at the time and only defends herself because Reimu and Marisa broke in and woke her up. Naturally, she loves her flowers and is actually more like a force of nature than a typical youkai.

The goddess of the dream world the player character stumbles into during the Extra stage, apparently.

"Don't underestimate me. The two of us put together are actually a full-fledged adult!"

Mugetsu's older sister and a demoness. Seriously, that's about all we know about her.

Another one of those useless gatekeepers, Sara guards the doorway to Makai. Seems to consider humans food.

"Well, Makai is a nice place, so relax and do some sightseeing while you're here ☆."

A tourist from Makai. Had the bad luck of running into the heroine before she could make it to Gensokyo.

"Silly shrine maiden, your two-colored powers are a mere twenty-eight-point-five-seven-one-four percent as powerful as mine!"

Another magician that lives in the Forest of Magic, and neighbor to Marisa. Her power is magic, with her signature ability being the manipulation of her dolls. She's mostly aloof and self-confident, but is still willing (if reluctant) to work together with Marisa and isn't above showing kindness to others.

"I'll lead you to a place where you can rest forever ♥."

Tries to stop the player character once she gets into Makai, alongside Mai.

"Now that she's not dragging me down, I can finally get serious."

"How can you let such a person just leave like this!"

A blade-throwing maid and one of Shinki's strongest servants. Tries to protect Shinki from the heroines. Fails.

"Defeat me? How foolish!! A shrine maiden is nothing more than a dog of the gods."

The creator of Makai. Since she allowed a travel agency in Makai to organize tours into Gensokyo, the heroines decide to beat her up.