This page is for Touhou characters who debuted in these non-game spinoffs.

"Don't you get it yet? Dream and reality are the same thing. I said so all the time, didn't I? To me, talking to you now might be dream or reality, I don't quite know..."

A human from outside the border, she is one of the members of the Sealing Club. She has the power to sense and possibly cross boundaries, and has entered Gensokyo (among other places) in her dreams. Maribel and Renko apparently come from 20 Minutes into the Future, where some foods such as bamboo shoots and strawberries are only available as synthetics. Not only are many edible plants extinct, but it is a world where "children do not smile" and commercial Moon trips seem to be commonplace. Probably has some sort of connection to Yukari Yakumo, though when asked by fans about the relationship at a High School lecture, ZUN merely gave the cryptic response of "There was a man named Lafcadio Hearn."

Maribel's friend, who also lives outside of Gensokyo, and the other member of the Sealing Club. Renko initiates most of their activities. She has the ability to determine her exact position and the current time by looking at the moon and the stars respectively. Heavily implied to be the descendent of or other close relative of Sumireko Usami, due to their shared surname and Sumireko founding her own Sealing Club.

Debuted in Curiosities of Lotus Asia 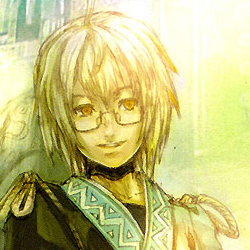 The half-youkai, half-human owner of the shop Kourindou, he uses his power to identify strange objects with True Names and figure out their function. Thus, his shop deals with objects from outside of Gensokyo that won't be easily identified, like his own oil-burning heater, a Game Boy (which he mistook for an Artifact of Doom) and various knick-knacks that Marisa gathers from time to time. 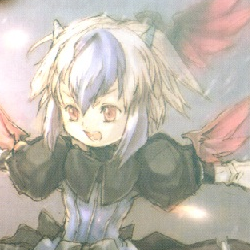 "I know the one in red is in there! She's the one that took my books!"

An unfortunate book-reading Youkai who was beaten up by Reimu, who mistakenly assumed she had stolen some books. When she tries to get them back, she gets beaten up by Marisa.

The Three Fairies of Light

The Three Fairies of Light

Three fairies who love playing pranks on others and go treasure hunting, and often get punished for their practical jokes. Each fairy possesses a different power and are able to combine their talents. Though, while they are known for their teamwork, it is often haphazard, and they are often unsuccessful at pulling off their pranks. In Eastern and Little Nature Deity and Strange and Bright Nature Deity they lived in the Forest of Magic like Alice and Marisa, but as of Oriental Sacred Place they've moved their home behind the Hakurei Shrine.

Tropes associated with the Three Fairies of Light: 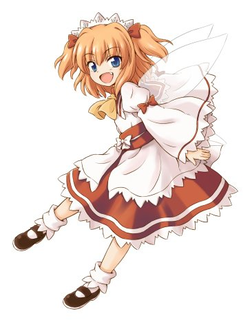 "I'm the strongest of us three! I'm gonna go all out against you, so get ready!"

Self-proclaimed leader of the Three Fairies of Light. Sunny can manipulate light via refraction. She is at her strongest during the day when the sun is out, but is weakened if the weather is cloudy. 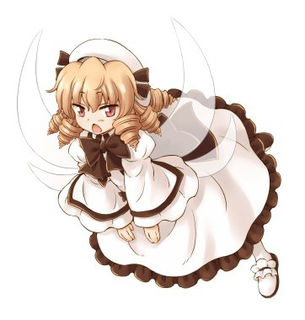 "Sorry to say, but the night is my specialty. This is where your advance ends!"

Luna can manipulate sound, dampening it so she can sneak around. She is at her strongest when the moon is out, but is weakened if the weather is cloudy. 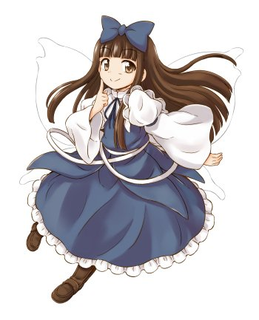 "The way you act is pitifully easy to sense. You're quite a fool for not noticing you've been lured here."

The smartest member of the Three Fairies of Light. Star can sense any moving animate thing in a wide area, making her sort of a living radar. Unlike Sunny and Luna, she is unaffected by the time of day or the weather. 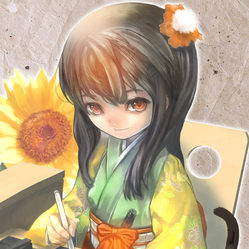 "If there are any opinions you'd like to present, please visit the Hieda residence. If you come to help tidy the place up, then even youkai are most welcome."

The ninth Child of Miare, a reincarnation of the historical Hieda no Are

who is born with a photographic memory and knowledge of their past lives. Akyuu is the current author of the Gensokyo Chronicle, an anthology of Gensokyo's history (published in Real Life as Touhou's Universe Compendia, Perfect Memento in Strict Sense and Symposium of Post-Mysticism), which has received a new edition with each of her incarnations.

Debuted in Silent Sinner in Blue 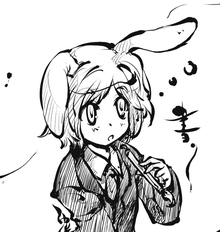 "H-How rude! There's nothing wrong with me! I just hit a little space debris, that's all!"

An apparently ordinary Moon Rabbit who's gotten herself deeply involved in the events of Silent Sinner in Blue. Rei'sen is just a literal pet name given to her by the Watatsuki sisters, in honor of their previous pet Rei'sen (aka Reisen Udongein Inaba). Her original name is unknown. 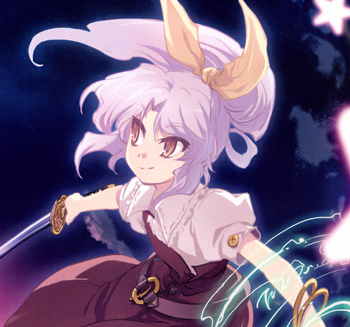 The Moon Princess Possessed by Divine Spirits
Watatsuki no Yorihime

"But, you know, if we're under suspicion I can't just do as I please like you, my sister... I can't live a carefree life like that."

The younger of the Watatsuki sisters, Lunarian princesses and leaders of the Lunar Defense Corps. Yorihime is the more serious of the two, and the one in charge of the Moon Rabbits' combat training (with Reisen Udongein Inaba having been one of her star pupils). She has the power to channel gods, shared by Reimu, but due to a better work ethic she can use it far more effectively. 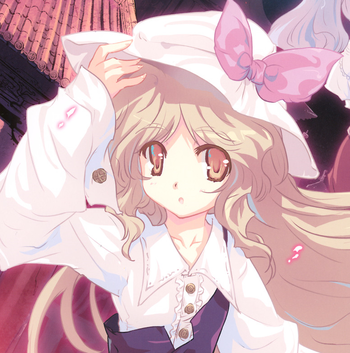 The Moon Princess Connecting Mountain and Sea
Watatsuki no Toyohime

"It's quite impossible for the creatures here to live without sin. Simply living and dying on earth is sin enough."

The older of the two princesses, Toyohime has a more carefree personality than her sister, though she can get serious too. She is in charge of the routes between the Moon and Earth, acting both as a watchman and as leader of the capital's Moon Rabbit emissaries. She has "the power to connect sea and mountains", which allows her to move things between the true Moon, the false Moon and Earth.

A Lunarian goddess and criminal who was imprisoned for drinking the Hourai Elixir, and the true master of the moon rabbits. She is also a source of hatred for Junko and Hecatia for the actions of her husband Houyi, who while shooting down nine suns managed to kill Junko's son indirectly and shot down Hecatia's cousin Apollo.

A group of moon rabbits appearing fairly frequently in Silent Sinner in Blue. As part of the Lunar Defense Corps, their job is to defend the moon. They're not very good at their jobs, however, and leave the actual job of defending the moon up to Yorihime when Reimu and company arrive.

Tropes associated with the Moon Rabbit Mob in general:

Debuted in Wild and Horned Hermit 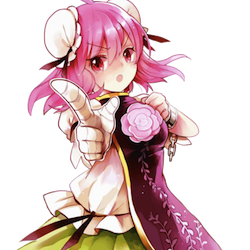 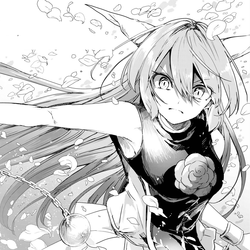 The Cunning and Treacherous Oni

"The only people who live on the surface are good men, saints... and True Villains."

A friendly but stern hermit who frequently visits Reimu at the Hakurei Shrine. She describes herself as "a guide to animals", and cares for a menagerie of rare and legendary creatures from her hidden dojo on Youkai Mountain. Her right arm is covered in bandages, and has strong magical power that can destroy evil spirits (though when squeezed, there appears to be nothing but smoke underneath). Kasen has some kind of connection to Former Hell, as well as to Suika and Yuugi, which are among the very unsubtle hints that she is actually an oni in human disguise. Her exact motives for this charade, however, are a lot harder to figure out. 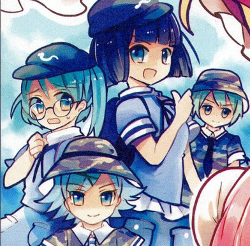 A group of unnamed Kappa who show up frequently in Wild and Horned Hermit. Most of them seem rather shy around humans, and will leave the talking to Nitori if she's around.

Tropes associated with these kappa:

A nervous kappa with glasses and a ponytail.

A cheerful kappa with short black(ish) hair. Probably the most popular of the group in fanart.

A kappa with spiky hair held back with an X-shaped hairclip. Seems more serious and level-headed than the others.

An unusually talkative kappa with messy hair and freckles, who likes dealing with money. Referred to as "merchant kappa" in the artist's notes.

The Oni in Hell (Unmarked Spoilers!) 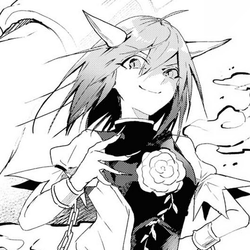 "It was awfully rude to borrow your power only to trap you here for eternity. As I thought, I should be a proper oni and devour you, flesh and all!"

The living incarnation of Kasen Ibaraki's right arm, who traps Reimu in hell and ambushes her. 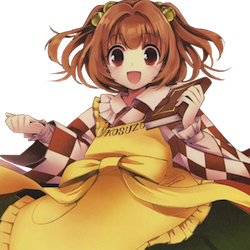 "Well, we'll cross that bridge when we come to it. When we get to that bridge, I'll count on you to handle it, Reimu-san!"

Daughter of the human village's local book renter and friend of Reimu and Akyuu, she has the ability to read books in any language, though she only gained this ability shortly before Forbidden Scrollery begins. She's a enthusiastic bookworm who loves to collect books for herself as well as lend them out, even though the books she collects are supernatural and potentially dangerous in nature. This makes her a liability in Reimu's eyes, but Kosuzu has faith that Reimu will always come and rescue her. She looks up to Mamizou without realizing that she's not human. 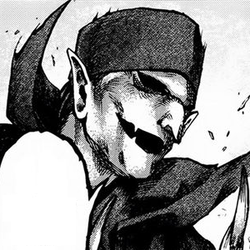 "Ridiculous! Aren't you on peaceful terms with a number of youkai?! So why...?!"

A fortune teller who killed himself six months prior to the events of Forbidden Scrollery, after being forced to leave his fortune telling school for practicing magic, who used a loophole using the fortune telling book he created in order to come back to life as a youkai.

He has the dubious honor of being the only fully sapient youkai to have actually died onscreen in the Touhou series. 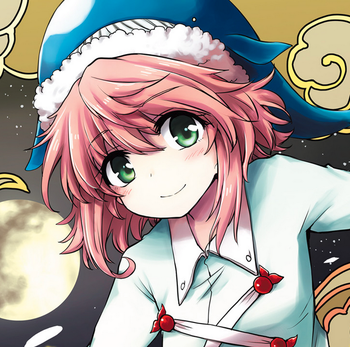 The main server of Geidontei, a pub in the Human Village frequented mainly by old men, who happens to be a zashiki-warashi temporarily taking residence inside Suika's Ibuki Gourd. 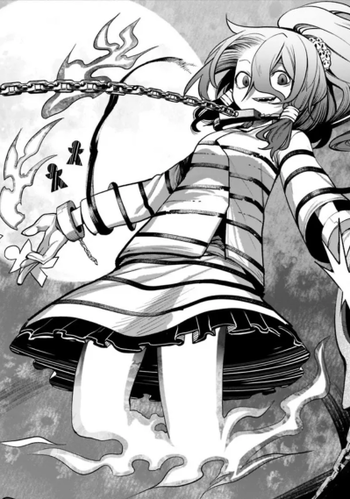 "...How long has it been? Since Gensokyo lost its chaos. Unnatural order is bound to break somewhere."

A vengeful spirit who escaped from Former Hell who is trying to go around and possess people in order to drain their magical energy.