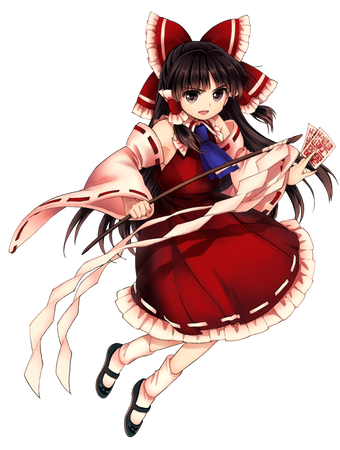 Reimu Hakurei * "Reimu" is spelled 靈夢 in the PC-98 games. In the Windows era this was changed to 霊夢, using a more modern rei kanji with the same meaning.

"I am the shrine maiden of paradise, Reimu Hakurei! I'll protect the Barrier, no matter what! And I'm not gonna let some human die stupidly right in front of me!"

The all-too-familiar shrine maiden of the Hakurei Shrine.

The main protagonist of the Touhou series in general, Reimu is the shrine maiden of the Hakurei Shrine, built on the border of the Great Hakurei Barrier which surrounds Gensokyo. Apart from her traditional miko duties, the Hakurei Shrine Maiden also acts as a sort of sheriff, protecting Gensokyo's native humans by resolving disturbances and "incidents" caused by Youkai. She is the official author of the Spell Card system, a type of Wizard Dueling which allows most such conflicts to end nonlethally, though she does not appear to have been its sole inventor.

Reimu is extremely talented, but hates training and is very lazy. She's a fair, honest person who acts the same way around everyone, regardless of social status and whether they're a friend or enemy. Unfortunately that usually just means she's a cynical jerk to everyone equally. This passive attitude towards monsters doesn't sit well with most of the humans in Gensokyo either, which means her shrine is unpopular and receives few donations.

An ordinary magician living in Gensokyo. She has a mania for collecting things.

A magician who lives in the Forest of Magic, Marisa first appeared as the Stage 4 boss of Story of Eastern Wonderland and became a playable character in every game afterwards, eventually becoming the secondary protagonist of the Touhou series. In the Windows games Marisa is established as Reimu's best friend and Friendly Rival, with the two being inseperable in the manga. In contrast to Reimu, who was strong from the day she was born, Marisa is a completely normal human with no innate supernatural abilities... not that she let that slow her down. Nowadays she takes pride in her status as an "Ordinary Magician" who earned her spot in Gensokyo's list of notables through nothing but persistence and hard work.

Marisa is rude, loud-mouthed, and a notorious liar and thief, but also a very straightforward person. Despite her rough edges, between her and Reimu she's portrayed as the friendlier and more sociable main character, with enough connections in town and elsewhere to always know the latest gossip. She is also more sentimental than Reimu, and tends to worry more actively about the safety of the human village even if she doesn't admit it. Due to the amount of research and experimentation required for her spells, she can be surprisingly knowledgeable about science and magical substances (albeit as a resident of Gensokyo, her understanding of Outside World science tends to be distorted at best).