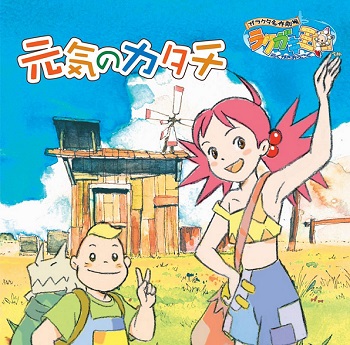 At the dawn of time, there were no colors. Then the Spirit of Creation came, and created the four basic colors: Red, yellow, blue, and green. From this, all other colors were born, and the world blossomed with life-forms known as Doodles. Humans were given the power to create Doodles in order to help them. But an evil king tried to use Doodles for his own gains, so the Spirit revoked the power of making Doodles. Only those who were pure of heart would be granted the ability to create Doodles, using the powers of special magical creatures called Pengels.

The story proper begins with a Featureless Protagonist falling in with a pair of siblings named Zoe and Taro. The two live in a ramshackle shack near the sea, and the Kingdom is threatening to take away their land. But then they notice that the player character possesses the ability to make Doodles. So they decide to partner with them in order to participate in the Kingdom's great Doodle Championships, where Doodles battle one another to win valuable Color Gems. They'll win lots of color gems, and they'll save their home, correct?

Unfortunately, it isn't so simple. The Kingdom places a mighty tax on color gems, and earning money isn't easy. The current champion, Kiba, has just rolled into town, and he seems to have a history with Zoe and Taro's father, Galileo. And if that wasn't complicated enough, Zoe and Taro stumble across a mysterious boy named Mono, who seems to have known their father—better, in fact, than Zoe and Taro seem to. Who is Mono? What happened to Galileo? And what is really going on in the Kingdom?

In addition to its unique concept, the game is notable for having character designs—and a few animated sequences—by a little Japanese animation house called Studio Ghibli. You may have heard of them.