The Fearsome Well Spirit
Kisume
"So is THIS the body you dropped down here?"

Another midboss with no dialogue, Kisume is a tsurube-otoshi, a type of youkai which was sometimes said to drop buckets on people. She just spends most of her time in buckets herself out of shyness.

The Bright Net In The Dark Cavern
Yamame Kurodani
"You're looking for the power of the youkai who got banished down here, right?"

A tsuchigumo (spider youkai), and a bright, fun-loving girl who's popular among the youkai underground. One of the many youkai that moved to the underground due to fellow youkai distrusting them for their powers. 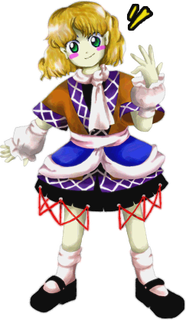 The Jealousy Beneath the Earth's Crust
Parsee Mizuhashi
"I'm jealous of the light above ground. I'm jealous of the gentle breezes. I don't have anything against you, but I can make up lots of reasons to attack you."

A bridge princess youkai who guarded the bridge between the underworld and the overworld, before the two were separated. After centuries of jealousy towards those who cross the bridge freely, she has developed the power to control jealousy in others.

The Rumored Unnatural Phenomenon
Yuugi Hoshiguma
"Hey, you're pretty good. Dunno who you are, but they say a rowdy welcome is best for a rowdy guest!"

A powerful oni and one of the four Devas of the Mountain, along with Suika Ibuki. She possesses great strength, and like most oni, loves competition with others. She agrees to help guide the heroines if they'd give her a good fight. 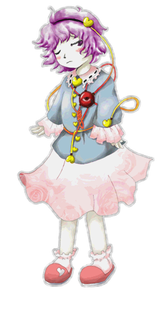 The Girl Even The Evil Spirits Fear
Satori Komeiji
"...visitors? How unusual."

The mistress of the Palace of Earth Spirits, Satori is a youkai with the ability to read minds. Her power makes her embittered and feared by humans and youkai, but beloved by animals. She keeps many pets in her home, including Rin and Utsuho. 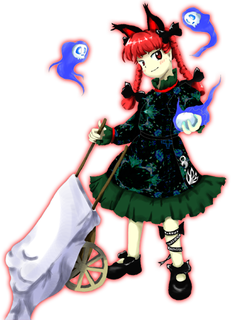 Corpse Tour Guide / Hell's Traffic Accident
Rin "Orin" Kaenbyou
"If I kill you, human, my hellfire cart will get heavy~♪ Man, carrying off corpses is fun!"

A kasha who can control evil spirits and carry them to the Hell of Blazing Fires, and one of Satori's many pets. She dislikes long names, so she has everyone call her Orin instead of by her full name. She thinks highly of her mistress Satori, and is good friends with Utsuho, but becomes terrified once Utsuho starts going mad from her newfound power. Afraid that Satori may find out and punish Utsuho, Rin instead drives evil spirits above-ground, attempting to lure the powerful youkai living there down to help her out. 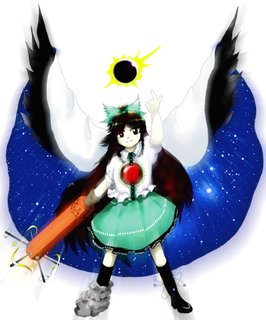 The Scorching, Troublesome, Divine Flame
Utsuho "Okuu" Reiuji
"The sunlight that rains down on the Earth is a nuclear furnace that will create new atoms. My ultimate nuclear fusion will burn up every body, heart, ghost, and fairy!"

A hell raven who manages the former Hell of Blazing Fires, and another one of Satori's pets. Prior to the events of Subterranean Animism, Utsuho was visited by Kanako and told to swallow the corpse of the sun god Yatagarasu, thus gaining the power of nuclear fusion. Kanako presumably wanted the power to bring electricity to Gensokyo, but Utsuho instead goes mad from the immense power she gained, planning to torch Gensokyo and turn it into hell on Earth. She's based on a legend of a three-legged crow who prevented a monster from eating the sun. This being Gensokyo, she was the one who ate the sun god. 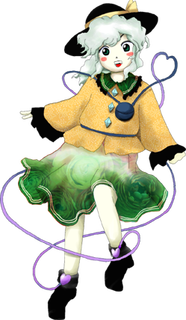 The Closed Eyes Of Love
Koishi Komeiji
"Read your mind? I've already closed my satori eye. Reading people's minds only make you depressed and there's nothing good about it."

The Extra stage boss and Satori's younger sister. She too was born was the power to read minds, but hated how it made everyone fear her, so she willingly sealed away her "third eye" that gave her the power. While this gave her a new ability to read and manipulate people's unconsciousness, it also resulted in her own heart being sealed away, and she becomes more distant and detached towards everyone as time passes.

Koishi picks a fight with the heroines in Subterranean Animism when both reach the Moriya Shrine for "a divine blessing" note in reality, the heroines are investigating Utsuho's source of power, while Koishi wants to get that power for her own pets, citing the absence of the Moriya gods and a desire to best the person who fought Satori. In Hopeless Masquerade, she unknowingly picks up the Mask of Hope, seemingly gaining emotions and popularity in the process, but this kickstarts the events of the game when Hata no Kokoro, the rightful owner of the mask, goes insane after realizing said Mask of Hope is missing.