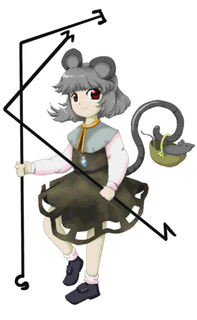 "My mice do like the taste of human flesh. They say that cheese just can't compare to certain other red foods."

A mouse youkai who was sent to hunt for the ship fragments and the jeweled pagoda of Vaisravana/Bishamonten by Shou. She carries a pair of dowsing rods which appear to be a cross between bent coathangers and weather vanes, and can control field-mice to help her find lost objects. She doesn't seem to consider herself one of Byakuren's followers, living in a house of her own and only visiting the Myouren Temple when Shou calls for her. 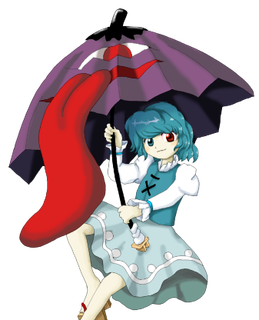 "These days you have to punish someone a little to surprise them, don't you?"

Kogasa is an umbrella that eventually came to life because she was unsold, becoming a youkai after she was swept off by the wind. Enjoys surprising people and watching their reactions, however as she isn't very good at it she's trying to improve her technique. 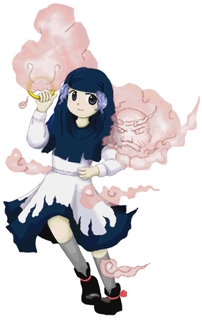 The Great Wheel that Guards and Is Guarded
Ichirin Kumoi

"I'm Ichirin, and I'm taking my sister's place guarding the treasure. I won't let any thieves in alive!"

Self-appointed guardian of the UFO that appeared over Gensokyo, and the first of Byakuren's followers the player encounters. She possesses a "partner" entity named Unzan. Ichirin's headdress is a nod to Buddhist nun gear, Unzan being a nyuudo - a collective term for youkai that resemble monks. 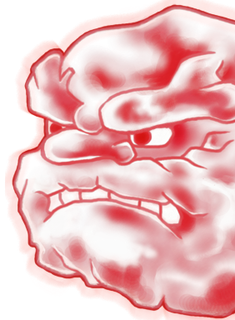 Cloud-like "partner" entity to Ichirin. He is able to shapeshift into giant fists or a giant face and almost never speaks, preferring that Ichirin speaks for him.

"Hehe, unfortunately we can't bring powerless passengers with us. Now, leave the treasure here and return back to earth!"

A funayuurei, the ghost-turned-youkai of a drowned girl that spent a few years capsizing ships, until she was unbound from her place of death by Byakuren who offered her a new ship to captain. She and the Palanquin Ship ended up bound in the underworld with Byakuren's followers until Utsuho's geyser blew it off into the sky, kick-starting the game's plot. 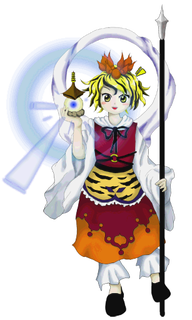 The Disciple Of Bishamonten
Shou Toramaru

"Then you'll have to bear witness to the light of dharma which is even brighter here in Makai. And bow down before this pagoda of Bishamonten!"

An "honest and straightforward" tiger youkai representing good fortune, who was turned into an avatar of the Buddhist god Vaisravana/Bishamonten

through the intercession of Byakuren. She sought the fragments of the Flying Storehouse and the pagoda of Bishamonten to finally release Byakuren. 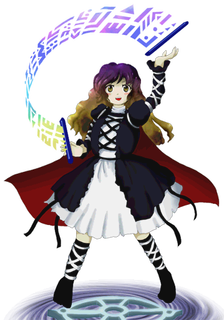 "Oh, the world of dharma is filled with light. Are you the one who liberated this world?"

A Buddhist nun turned youkai magician. She pretended to specialize in youkai extermination, but helped the youkai by relocating them far from human settlements, like Minamitsu, instead of killing them. When her eternal youth raised suspicion, she was sealed in Makai. Nazrin, Ichirin, Minamitsu and Shou were successful in freeing her, with some unintended help from the player character, and now she maintains her new temple in Gensokyo.

Byakuren's little brother, a monk who taught Byakuren Buddhist magic. His death made her fear her own, and drove her to seek eternal youth.

Word of God is that Myouren was originally intended to be the final boss, but, as amusing as it would have been to have an "old man" be the final boss of a Touhou game, ZUN decided to play it safe and made Byakuren instead. 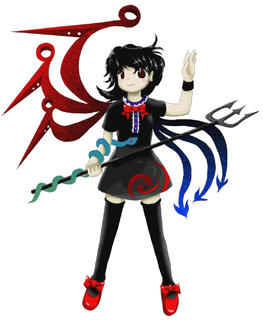 "You human who's forgotten the fear of night! Die from the terror of this unidentified flying object!!"

Nue is a youkai who has the ability to hide her true form, and thus all accounts of her appearance vary wildly. When she got tired of frightening humans, she hid away underground, although her dialogue indicates a human sealed her after discovering her true form. After getting caught up in the rising of Byakuren's ship she decided to tag along and attempt to cause trouble for them.