This page is for Touhou characters who debuted in Touhou Eiyashou ~ Imperishable Night.
open/close all folders
Wriggle Nightbug 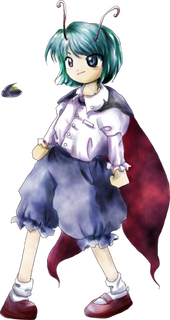 The Insect Of Light Crawling In The Dark
Wriggle Nightbug
"...C'mon, I'll shoot first if you don't!"

A firefly youkai with the ability to control insects. 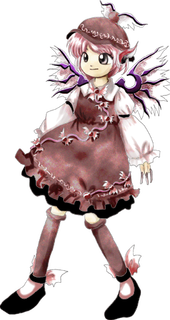 A night sparrow youkai who loves to sing. Her singing causes night-blindness to those who hear it, which in-game shrinks the player's field of view. She currently runs a food stand that sells grilled lamprey. 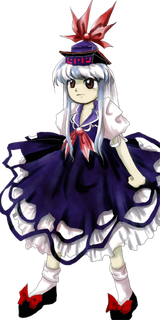 Half-Beast Of Knowledge And History
Keine Kamishirasawa
"Tonight, I'll make an imperial feast out of your history!"

A were-hakutaku who helps run a temple school

for the children of the Human Village.note Fanon has it that various "child" characters, like Cirno, Mystia, Rumia, Daiyousei, and sometimes even Tenshi, Parsee, and Kisume, all attend her school as well, but in canon she refuses to teach youkai. Despite transforming into a youkai on the full moon, she is staunchly on the side of humanity, and protects the village in times of danger. Keine possesses the ability to "eat history" in human form, and to "create history" in hakutaku form, but her powers only affect how things are perceived (i.e. she can conceal an object by eating its history, but not destroy it). She's also one of Mokou's few friends. 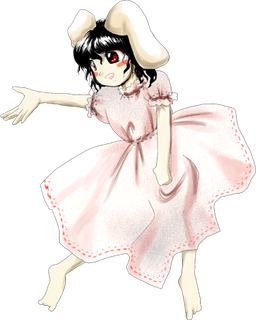 White Rabbit of Good Fortune
Tei/Tewi Inaba
"I don't lie just for my own fortune, but for those I trick, too. If you want bring good fortune to someone, you've got to lie."

An earth rabbit youkai and leader of the earth rabbits of Eientei. Her explicit power is the ability to bring good luck to people, but usually she's just a prankster. Started as another stage midboss with no dialogue, only a name and profile, but later got more coverage, including a major role in Inaba of the Moon & Inaba of the Earth. 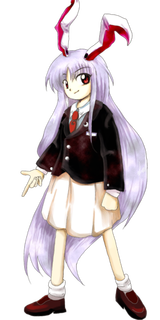 Formerly a Lunar Rabbit named Rei'sen who fled from the Lunar War,* which supposedly started with Neil Armstrong landing on the moon and planting a flag abandoning her comrades. It's not known whether she did it out of cowardice or something else. She was found in Eientei by Kaguya and became her pet and Eirin's student. Changing her name to "Reisen", and receiving the nicknames "Udonge" from Eirin and "Inaba" from Kaguya (though that's what Kaguya calls all rabbits), she now loyally serves and protects her master and teacher. Being a Lunar Rabbit, she is gifted with the madness-inducing eye, though Phantasmagoria of Flower View reveals that her eyes actually control waves in general, including mind waves and electromagnetic waves. 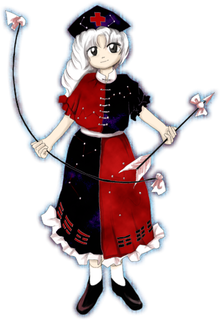 Brain Of The Moon
Eirin Yagokoro
"There are also foolish humans who deliberately come all the way to the moon, and in the end, stick a flag on it as if it were their own. That's why Earthlings have always been, are now, and will forever be inferior."

A Lunarian and a genius pharmacist who serves Princess Kaguya. She is the one who created the Hourai Elixir consumed by Kaguya and Mokou, as well as many other miraculous inventions. Eirin was an elite member of the moon's ruling class and part of the Lunar envoy sent to retrieve Kaguya, but instead betrayed and killed the other envoys and fled into hiding with Kaguya at Eientei. During the events of Imperishable Night it was she who stole the moon, by sealing Earth itself in a magic chamber, thus preventing the Lunarians from coming to Earth. Subsequently she has opened a pharmacy catering to both humans and youkai. 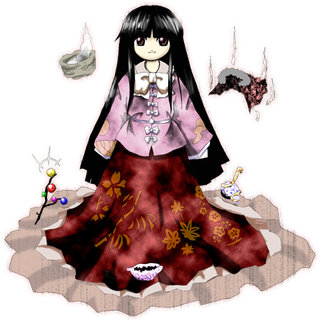 The Eternal Moon Princess
Kaguya Houraisan
"My five requests that so many humans in the past have failed to complete... How many of them can you fulfill?"

A Lunarian princess who was exiled to Earth centuries ago for having consumed the Hourai Elixir, which made her immortal. While on Earth, her beauty attracted many suitors, including Mokou's father, but all were unable to complete her five impossible requests. When her exile had ended, she refused to return to the moon, and instead convinced Eirin to betray the Lunarians and escape into hiding with her. Her backstory is based largely on the Tale of the Bamboo Cutter

, the oldest known example of Japanese literature and quite possibly the original science fiction tale. 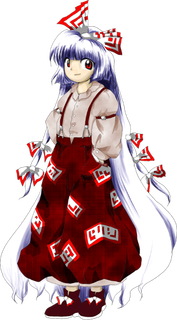 Hourai Incarnate
Fujiwara no Mokou
"My time is unlimited. That's why I must treasure this limited time."

The Extra stage boss of Imperishable Night, Mokou was the daughter of a nobleman (presumed to be Fujiwara no Fuhito

, the founder of the powerful Fujiwara clan) who was scorned by Kaguya centuries ago. She swore revenge against Kaguya, and ended up stealing the Hourai Elixir and consuming it, becoming immortal. Centuries later, after having completely forgotten about Kaguya over the years, they happened to meet again in Gensokyo and Mokou rekindled her grudge, if only to have a purpose in her infinite lifespan.