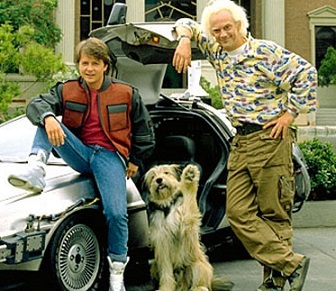 Marty and Doc, friends for all time.
Advertisement:

Two people are good friends. Only, one of them is about twice, three times, — or even four or more times — the other person's age! Considering their differences in life experiences and worldviews, how do they relate? What could they possibly have in common? Assuming this is actually a platonic friendship and not something far more sinister, or for that matter an overtly stated mentoring situation, intergenerational friendships can be pretty weird. As the Real Life section indicates, while not everyone finds older or younger people completely unapproachable, there's still frequently a gap there.

This can take the form of a young adult from one generation befriending someone old enough to be their parent or even grandparent, such as in the comedy Finding Forrester. It can take the form of an adult befriending a misguided or vulnerable youth, as in the French film Leon. Sometimes, the two happen to have more in common than they think, such as having surprisingly similar life experiences. Sometimes the younger generation is more mature, or the older generation is less mature; the latter especially helps writers to dodge away from worrying questions being asked about sexual attraction.

As for how they become friends, it could well be contrived circumstances that bring them together, or a shared life experience. Sometimes it's a teacher trying to help a troubled teen, leading to them becoming close friends. Either way, the situation that leads to their friendship would often be something out of the ordinary, since in real life, people of two widely different age groups generally do not reach out to each other.

Sadly, though, if it's an adult and a child who are friends, in modern stories, expect someone to misinterpret it as being sexual, and violence to possibly result. Sometimes the younger one will have an innocent Precocious Crush on the older one.

This trope does not generally apply if it's a parent-child relation between the two.

A subtrope of Odd Friendship.

Twenty years ago, Tarou was a upcoming politician in his thirties, and Itami was a middle school student. Both of them met on a street corner and became friends due to their mutual love of Manga and Doujinshi.

Twenty years ago, Tarou was a upcoming politician in his thirties, and Itami was a middle school student. Both of them met on a street corner and became friends due to their mutual love of Manga and Doujinshi.