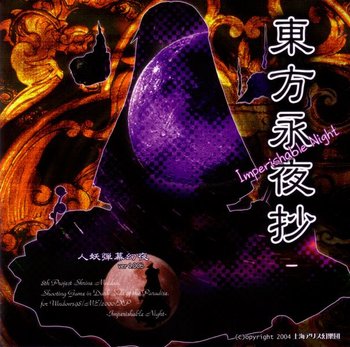 This time you're on a time limit.
A glowing, ancient, virgulate object.
A small gem. A shining orb. A fragile soul. And the largest sphere.
"How is she doing these days?" she wondered as she stared at these objects.
Time does not flow in this place. History repeats itself.
She, too, was in Gensokyo.
—Epigraph
Advertisement:

Touhou Eiyashounote "Eternal Night Vignette" ~ Imperishable Night is a video game created by Team Shanghai Alice for Windows computers in 2004. It's the eighth installment in the Touhou Project franchise.

It's the night of the full moon, seemingly one like any other. But the youkai who tonight would normally be invigorated have instead been thrown into panic... because the power of the full moon is missing. Sensing a formidable enemy at work, one youkai seeks out a human accquaintance and together they cast Gensokyo into eternal night until the one who "stole the moon's light" can be found.

It's the night of the full moon... but it refuses to end. Another human sets out to break this curse, seemingly unaware of the real incident.

Designed as The Climax of Touhou's first "trilogy", Imperishable Night has higher stakes, returning characters Promoted to Playable, and even the heroes fighting each other. It's also filled with gameplay content, including a huge number of playable characters (12 including the unlockable solo routes) and two possible versions of Stages 4 and 6, each with different bosses. Finally it introduces the Lunarian civilisation, which would go on to be prominent in Touhou Bougetsushou and Legacy of Lunatic Kingdom.

IN expands on the "focus" mechanic by using it to switch between the human Player Character and their youkai partner, and including a "Human/Youkai Meter" which must be managed in order to collect Time Orbs and resolve the incident before dawn.

The game also features the Last Spell mechanic - a final "sudden death" Spell Card which bosses will use under certain conditions, granting the normal bonus if captured (completed without getting hit, bombing or timing out) but ending without penalty if not. Players have their own Last Spells as well - a variant on the normal "deathbomb" mechanic which activates an extra-powerful Smart Bomb if you press the bomb button as you are struck by an attack.