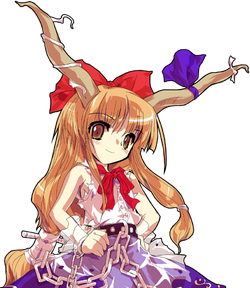 Suika Ibuki
"Your chi can't beat my chi. I AM chi."

An oni with the power to manipulate density, which extends to gathering or dispersing emotions and people, plus more destructive applications. She caused the inhabitants of Gensokyo to have more parties for a while, hoping to attract more of her kind to Gensokyo and reuinite her people that had been scattered long ago. Currently living in Bhava-Agra (one realm of Heaven) after threatening the inhabitants to allow her to stay there. 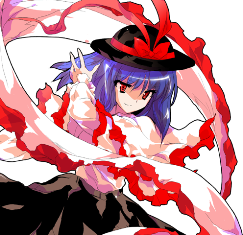 "We are messengers from the Dragon Palace. We swim in the sky only to warn of a certain disaster. The scarlet mist is a mist of temperament. The scarlet sky is a sign of the disaster to come. The scarlet clouds shall shake the earth. We swim to convey these things."

An oarfish youkai and a messenger of the Dragon Palace (the Japanese term for "oarfish" literally means "Messenger of the Dragon Palace"), she is said to be able to communicate with dragons. During the events of Scarlet Weather Rhapsody she realizes that an earthquake is going to occur in Gensokyo, so she travels there to warn the residents. This being Touhou, everyone who meets her assumes she's the cause of the incidents and decides to fight her instead. 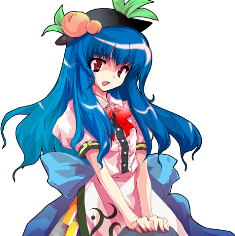 "I don't really want to unleash an earthquake on Gensokyo. A celestial's life is so boring; I just want to play like everyone else down there! That's why I made it look like a big quake was coming, to see who might come and stop me. You, who came all the way up here, can you satisfy me? You don't look very dependable...."

Born as Chiko Hinanawi, she ascended alongside her parents when they became celestials, and chose to rename herself Tenshi. However, as she did not earn ascension herself she is considerably less enlightened than her peers, referred to as a delinquent celestial, quickly bored and frustrated with Bhava-Agra. This is what prompted her to cause chaos in Gensokyo, having watched several of the incidents its inhabitants have caused and deciding they must be lots of fun. 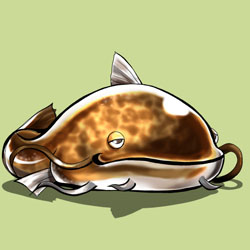 "I am the legendary Supreme Catfish. I need but one move and the earth itself will tremble, the lands on the surface will disintegrate. The likes of you cannot even begin to comprehend my power!"

A Big Freaking Catfish that appears as the final boss of Hong Meiling's story as an avatar of the "Taisui Xingjun", and Hong Meiling believes it is about to attack Gensokyo. A likely referece to the belief that a giant catfish causes earthquakes

"Oh, Aya's reporting style is so, like, pushy! Maybe I could learn something from how pushy she is. After all, the places where people refuse interviews are totally where the incidents are hiding, right?"

A tengu reporter, like Aya, who writes for her own newspaper: Kakashi Nenpo. Her "spirit photography" lets her find pictures and information without having to go out in person, but her news lacks the freshness of Aya's Bunbunmaru. She decides to observe Aya to find the secret to her success.

The Three Fairies of Light
See Touhou - Other Official Works 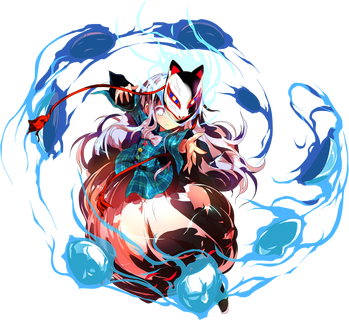 "In place of my lost Mask of Hope, a new hope awaits. I have nothing against you personally. However, I will claim all the hope in Gensokyo! For the sake of all human emotion!"

, a tsukumogami of the legendary kagura/noh masks of Hata no Kawakatsu

. She was originally 66 masks, but then the "mask of hope" was lost, causing her to go insane. Because of her power to control emotions combined with her own emotions running wild, her hopelessness accidentally spread to the humans of the village, giving rise to the events of Hopeless Masquerade. 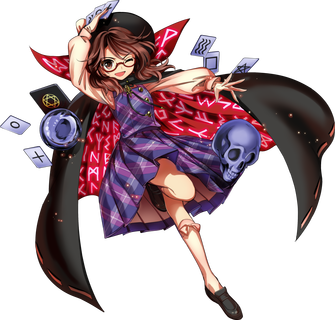 Expose the Esoteric! The First President of the Sealing Club!
Sumireko Usami

"You shouldn't underestimate humans these days. One can find just about anything by searching on the net, after all!"

A high-school student from the outside world who has psychic powers. She initially tries to breach Gensokyo's barrier from the outside world, which eventually causes the events in Urban Legend in Limbo. At the end of the game, she discovers that she's able to enter Gensokyo through her dreams. Sumireko appears to have some sort of connection to Renko Usami; while nothing has been confirmed, she's heavily implied to be Renko's ancestor, being the founder of the Sealing Club that Renko and Maribel are part of.

"You're about to learn first-hand why we're the most diabolical, disastrous sisters around!" 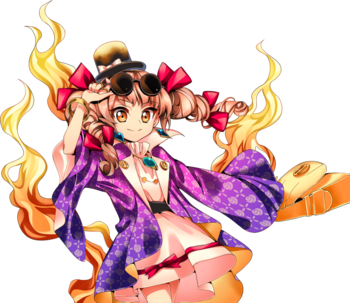 The Most Despicable and Disastrous Younger Twin Sister
Jo'on Yorigami

The goddess of pestilences, and Shion's younger twin sister. Her ability allows her to consume the financial assets of whomever she chooses. 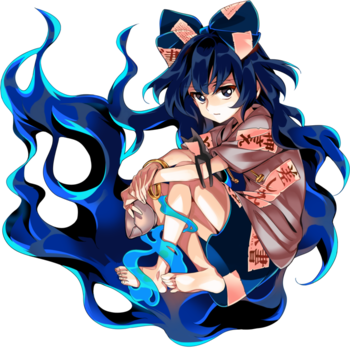 The Most Despicable and Disastrous Elder Twin Sister
Shion Yorigami

The goddess of poverty, and Jo'on's older twin sister. Her ability allows her to cause others to become unlucky, including herself. 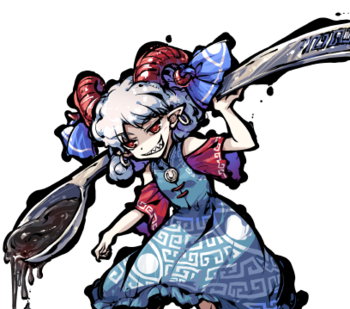 "As yet another organic being... It's time for you to writhe in agony and become another drop of this oil!"

A taotie who acts as the matriarch of the Gouyoku Alliance, a gang of the Animal Realm specializing in aerial warfare and sneaky tactics. Her ability is the power to absorb anything.