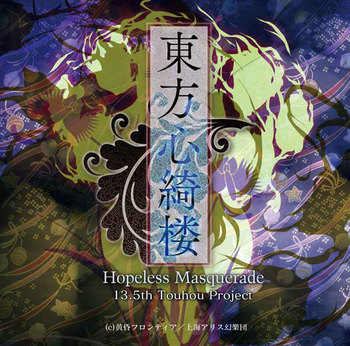 Touhou is popular, and this game is all about popularity.
Advertisement:

Touhou Shinkirou ~ Hopeless Masquerade is a video game created by Team Shanghai Alice and Twilight Frontier for Windows computers in 2013. It's the 13.5th videogame installment in the Touhou Project franchise.

After so many strange incidents and disasters beyond their control, the residents of the Human Village have begun to feel trapped, and their society threatens to fall into disarray. Believing that their times have come to shine, Gensokyo's premier representatives of Shinto, Buddhism and Taoism begin the "religious war", putting on dramatic aerial duels to win over the villagers' hearts (and if they can expand their own wealth and influence, that's just a bonus).

Hopeless Masquerade is a Mascot Fighter that moves away from both the engine and artstyle of the venerable Touhou Suimusou ~ Immaterial and Missing Power and its sequels, shifting to fully aerial combat inspired by Astra Super Stars.

The game features the popularity mechanic. Attacking with certain moves will increase it, but getting hit will decrease it. When full, the player can use a very powerful attack called a Last Word. However, since popularity decides who wins in a time out, it's a very risk vs. reward system. More gameplay info can be found on the wiki