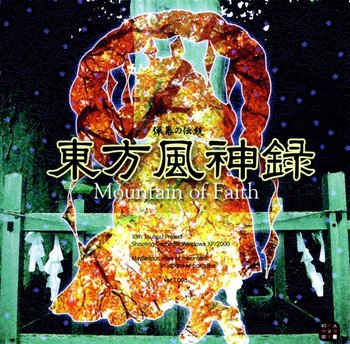 A new god cometh.
Light courses through the heavens. The sound of machinery echoes in the distance. Perhaps the tengu's factories have awoken. This is a world the humans from the village could never enter.
A building constructed of wood. The out-of-season call of a frog. The cast-off skins of countless snakes.
She was there. She had always been there. There, with a single human.
—From the prologue
Advertisement:

Touhou Fuujinrokunote "Wind God Saga" ~ Mountain of Faith is a video game created by Team Shanghai Alice for Windows computers in 2007. It's the tenth videogame installment in the Touhou Project franchise.

A new human shrine maiden appears one day at the Hakurei Shrine, ordering Reimu to either tear it down or turn it over to "the god atop the mountain". Reimu and Marisa decide to scale Youkai Mountain, home to Gensokyo's seclusive tengu and kappa populations, and meet whatever strange god this newcomer answers to.

The first of the "second generation" of Windows games, MoF has a new engine and shrinks the playable cast back down to Reimu and Marisa (but each with three shot types). It's also notable for introducing gods as a major setting element, distinct from youkai.note Though this arguably started in Imperishable Night with the Ambiguously Human Eirin.

This game's signature mechanic is a Faith Meter which slowly depletes over time, but can be refilled by fighting enemies and collecting faith items. The higher the player's Faith, the more their score will increase when collecting items and capturing Spell Cards.