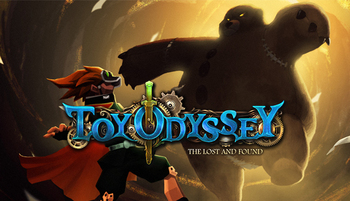 Toy Odyssey: The Lost And Found is a Roguelike Platform Game by Hiker Games.
Advertisement:

A young boy named Felix and his family have recently moved into a new house. While exploring, Felix finds a chest full of toys, one of which he takes to bed with him that night.

That night, the toy wakes up, not knowing who he is or what's happening. He soon meets a friendly firefly named Buck, who says Felix, his new owner, gave him the name Brand. Buck also tells Brand that Felix has been experiencing nightmares since moving to the house. Deciding he likes Felix, Brand decides to help him out.

Toy Odyssey: The Lost And Found contains examples of: