Webcomic / A Matter of Life and Death 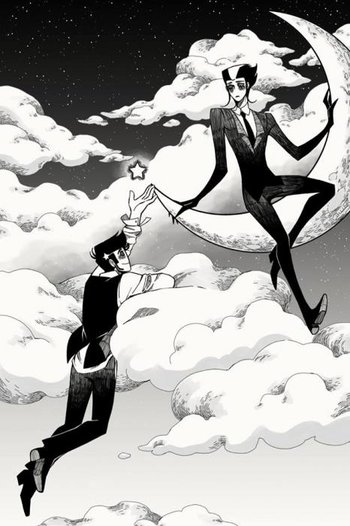 "Welcome to the world!"
"The Dead shouldn't intervene with the living."
— Death
Advertisement:

A Matter Of Life And Death

is a webcomic published on Tapas Media by a Vietnamese artist/game design student going by the handle "The Snipster." It typically updates every Friday and weekends.

Death is a god with an unsurprisingly depressing job - determining which human souls get to be reborn and live their lives anew, and which ones must be sent down to the land of Nim to become horrifyingly malformed beasts known as blights. However, Death also has more personal issues at hand, the most prominent being his long-standing feelings for his counterpart Life, who avoids him at every turn. Through a combination of awkward run-ins and changing circumstances, the two titular gods attempt to gain a better understanding of one another, and possibly even begin a budding romance in the process.

But not even a newly rekindled relationship can fix everything that's wrong with the world the gods reside in or the people in it. In the end, Life and Death must confront their respective issues head-on in order to truly be happy with one another; not to say they don't have each other's support along the way.

On Valentine's Day 2021, it was announced that the comic was ending with the creator (who is aromantic asexual) stating that they "genuinely don't feel comfortable drawing romance/sexual/intimacy anymore." They also stated that they hope to revisit the comic again in the future.

Not to be confused with the Michael Powell film of the same name.