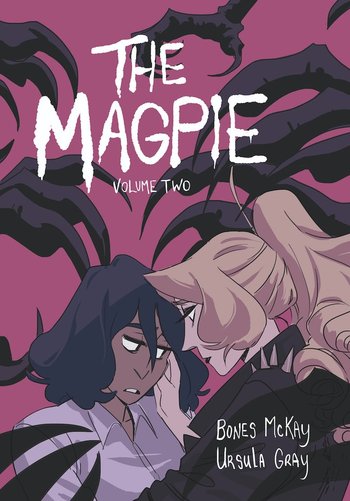 Left: Amanda. Right: Trixie. Those claws? The Magpie herself.
"There is no escape from Pinewood, this is the one thing Amanda knows. At least she thought she knew, until Trixie, the new girl came to town. As the rules she once believed fall apart, Amanda soon faces the truth of her town. She isn’t the only one that wants out."
— Description on Tapas.io
Advertisement:

The Magpie is a horror webcomic written by Bones McKay and illustrated by Ursula Gray as a prequel to their previous comic Pretty Mouth. It follows Amanda and the new girl Trixie on their quest to uncover whats behind the mystery of Pinewood.

The Magpie contains examples of: