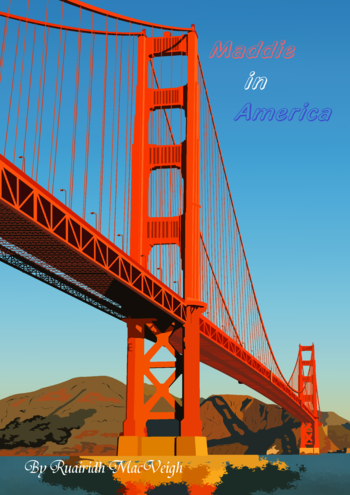 Time to see the world!
Advertisement:

Maddie in America was the second webcomic in Ruairidh MacVeigh's series that began with "Maddie on the Island Hue" Picking up about a month after the end of the previous comic, Maddie is about to turn 18, and her parents allow her and her boyfriend Andy to travel anywhere in the world they want to as a present. They decide on America and decide to take along their best friends and same sex lovers Siobhan and Ebony. Through their trip, they get to learn more about the world around them as well as each other.

The comic seems to put a greater emphasis on comedy than its predecessor, but still has serious moments, particularly involving Siobhan and Ebony being victims of the homophobia rampant in society (keep in mind the comic takes place in 1985) and having to keep their relationship under wraps as a result.

This comic had originally been hosted on a variety of sites, but has now been entirely deleted.

MacVeigh later confirmed through a retrospective that this story would be the end of the "Maddie" series. Soon after, he began work on a spin-off comic: Outsiders starring Siobhan and Ebony.