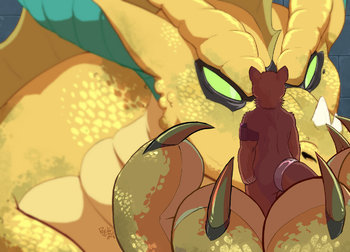 Your puny lives are in my hand
Advertisement:

The Hayven Celestia universe is a creation of Rick Griffin and Gre7g Luterman, based on Griffin's short story Ten Thousand Miles Up.

The krakun, a race of massive, long-lived reptiles, have enslaved dozens of smaller species through their use of gateways transported by Generation Ships crewed by their shorter-lived slaves. The primary focus of these stories are the geroo crew of the White Flower II, and their attempts to survive the oversight of their krakun overlords.

In 2014 Luterman wrote a serial fanfic of Ten Thousand Miles Up on his Livejournal titled "Skeleton Crew", which received Griffin's endorsement and has been published as the first of a trilogy of novels by Thurston Howl Publications.

hosts species sheets and other worldbuilding information. His website

has retail links to all the books and the comic Skinchange.