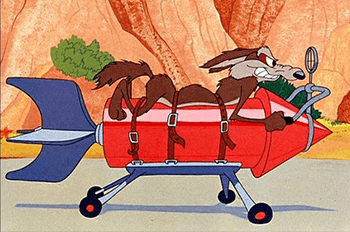 When will Wile E. ever learn?
"Coyotes! Those fierce, sneaky creatures that feast on frail animals. They're swift and spiteful too."
— Survivor Dogs
Advertisement:

Coyotes are some of the most crafty animals on the planet, traits which they share with foxes. Where wolves are struggling to survive in a world where their habitats are disappearing, coyotes have moved in and adapted so well we sometimes wonder who the suburbs were actually built for, us or them.

In Native American Mythology, he's a recurring character. One story even claims Coyote stole fire for man, and is seen as a benevolent (if tricky) God.

Then again, other times he's a bit of a fool, and can get himself into trouble, thinking he's got everything figured out. Outside of Native American portrayals, various other portrayals of coyotes don't take them quite as seriously as they take foxes and wolves, including one coyote who is arguably one of the most memorable Ineffectual Sympathetic Villains ever.

Coyotes in general though have a special place as tricksters, guides and a link to the unseen world. Other times, they are associated with the darker aspects of mysticism, along with cruelty and deceit, and may be a Skin-walker in disguise.

Anyways, you can bet that if a story wants to have an indigenous American flavor, a Coyote is bound to show up sooner or later. The association is so strong, it's spilled over into representing 'the American West' in general. They are often also shapeshifters, which goes along with their crafty, deceptive nature. And if there is any animal out there smart enough to talk, it's going to be the coyote, and he'll probably be snarky, too. Despite the fact that coyotes can live in bands, just like wolves do packs, they are usually seen as loners in folklore and media. Other common associations include shamanism, mystery, nature, or intelligence.

Compare Cunning Like a Fox and Clever Crows, who share a lot of the same associations as the Coyote, as they play similar roles in Native American Mythology. May be used as part of an Animal Motif. See also Animal Stereotypes.