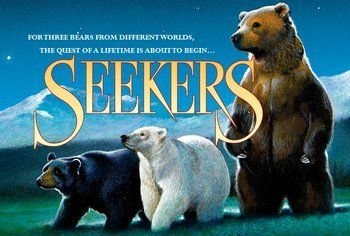 Seekers is a series of books by Erin Hunter, author of the wildly popular Warrior Cats series, chronicling the lives of four bears as they journey across North America to the Place of Everlasting Ice in order to fulfill the vague command passed down to them by their ancestors, "Save the Wild." Like its predecessor, Seekers is a regular occupant of the bestseller list.

There are twelve books in the series, not counting the manga. There are also at least two more manga, Toklo's Story and Kallik's Adventure. The first six are:

The final six-book arc called Return To The Wild is also completed. The traveling bears have finished their journey to the arctic and have completed their mission. Now they're on their way home, but the way back home is probably even tougher than their first journey.