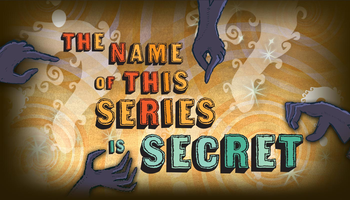 I can't keep a secret. Never could...
Advertisement:

The Secret Series is a series by Pseudonymous Bosch (real name Raphael Simon), a mysterious Lemony Narrator, about two children who are not named Cass and Max-Ernest. Cass is a survivalist, while Max-Ernest has a condition (though no one knows quite what his condition is). One day, they are swept into the dangerous world of the Terces Society and the Midnight Sun...and the Secret.

There are five books in the series:

In 2013, the series was followed by Write This Book: A Do-It-Yourself Mystery. While not directly a part of the Secret Series, it directly references several characters and situations from it.

In 2014, a followup trilogy began with Bad Magic. This title focuses on a new protagonist named Clay (originally Paul-Clay) who is sent to a strange camp for wayward youths after being falsely accused of an act of vandalism. Clay is the younger brother of Max-Ernest, who at the start of the novel has been missing for over two years, having disappeared leaving only a mysterious note telling his family not to worry.

Alternative Title(s): The Name Of This Book Is Secret