Literature / The Secrets of Droon 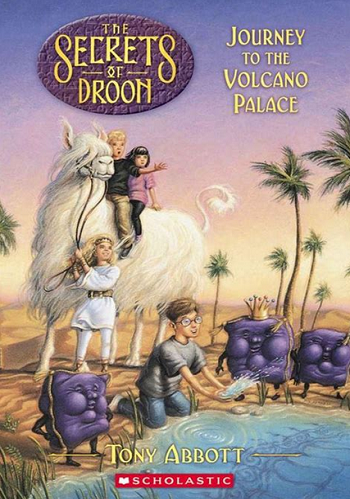 The Secrets of Droon is a children's fantasy series written by Tony Abbot and illustrated by David Merrell. With over 40 books (none much longer than a hundred pages), the series is intended to get children to continue reading after one book.
Advertisement:

The plot centers around three children, Eric Hinkle, Julie Rubin, and Neal Kroger, who find themselves in the world known as Droon after finding a magical staircase in Eric's basement closet. For the first ten or so books, the plot is relatively straightforward, chronicling the adventures the children have with their new companions Princess Keeah and the wizard Galen to stop the Evil Overlord from taking over Droon. Pretty soon, though, things start to expand and many genuinely surprising twists and turns come about. The plot gradually encompasses a massive amount of characters, several different worlds (including the Upper World, the "real" world where we live), and some long-needed subplots.

While the books themselves are rather predictable kids' books, and fall victim to many cliches, the series is quite enjoyable. It may not be complex, but it's fun, interesting, and can entertain just about anyone who reads it, regardless of age.

The Secrets of Droon provides examples of: